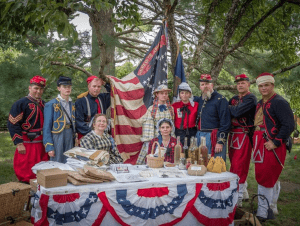 The Lincoln Depot Museum has announced the first event of their fall line-up has been set for Thursday, October 18th, 2018 at 7:30 pm. This living history talk will be led by Bill Wienecke, and focus on the 5th New York Volunteer Infantry.

The 5th New York Volunteer Infantry, also known as “Duryée’s Zouaves”, was a volunteer infantry regiment of the Union Army, during the American Civil War, led by Colonel Abram Duryée. Modeled, like other Union and Confederate infantry regiments, on the French Zouaves of Crimean War fame, its tactics and uniforms were different from those of the standard infantry.

Admission is $10 per person and free to museum members.

The Lincoln Depot Museum is located at 10 S. Water Street in Peekskill, NY. For further information visit their website or call (914) 402-4318.