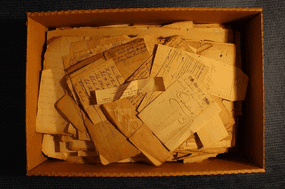 One of the projects selected for funding is an endangered collection of important documents regarding The Revolutionary War and New York Loyalists in need of conservation housed in the State Archives.

New York was a pivotal state during the American Revolution, militarily and politically. The records to be conserved to contain detailed but unutilized information about the state’s vigorous proceedings against suspected Loyalists, and about the royal government’s continued operations in New York City until the end of the war.

Funding from organizations such as the DAR and IMLS enable the State Archives to preserve documents related to New York Loyalists that provide new and revelatory evidence about contested political allegiances and make them available for research by scholars, students and the general public.