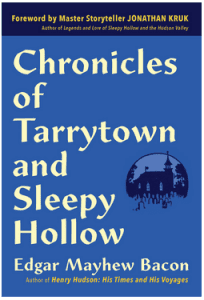 Edgar Mayhew Bacon’s new book Chronicles of Tarrytown and Sleepy Hollow (HVA Press, 2018) tells of the many myths and legends that surround the Sleepy Hollow area, from the Headless Hessian, known to grab at travelers in the night, to the sightings of the ghostly ship The Flying Dutchman.

Chronicles of Tarrytown and Sleepy Hollow is also a history of the area during revolutionary times. The book includes the tale of the capture of Major Andre, which led to the unmasking of Benedict Arnold.

Gavin Caruthers and Jonathan Kruk will appear on “History Alive,” hosted by professor Richard Hull, Author and Warwick Town historian. The show airs at 11 am on October 15.

Edgar Mayhew Bacon was born in 1855 and spent most of his life in the Tarrytown area. Before becoming a historian and writer, he worked in a bookstore in Albany. He died in 1935 and is buried at the Sleepy Hollow Cemetery in Tarrytown, New York.