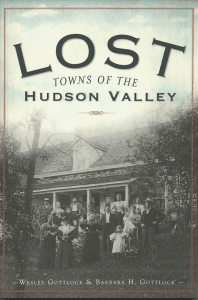 A talk on the book Lost Towns of the Hudson Valley, by authors Wes and Barbara Gottlock, has been set for Sunday, October 21, 2018 at 2 pm at the Time and the Valleys Museum on St. Rt. 55 in Grahamsville, Sullivan County, NY.

Lost Towns of the Hudson Valley is the story of towns located in New York’s Hudson River valley that met their demise almost as quickly as they were established. Roseton, the Ashokan Reservoir towns, Camp Shanks, Shanks Village and Rockland Lake were thriving settlements at one time only to be replaced by the likes of power plants, reservoirs, and housing developments.

Autographed books will be available for sale. Admission to the program is free for Museum members, and $3 for non members, which includes light refreshments and admission to the Museum and Lost Catskill Farm.

Wes and Barbara have lectured extensively throughout the New York City metropolitan area in recent years. They are still active volunteers with Bannerman Island. Wes is an island docent and coordinates all the public tours that come to the island. Barbara is on the Bannerman Castle Trust board of directors and coordinates the island’s volunteers. They both participate in river clean-up projects and fundraisers benefiting various Hudson River causes. Wes and Barbara reside in New Windsor overlooking the majestic Hudson.

The Museum is located at 332 Main Street (St. Rt. 55) in Grahamsville Sullivan County. Adults admission is a suggested donation of $5, Children under 16 $2, and children under six are free. For more information call (845) 985-7700, e-mail [email protected] or visit their website.