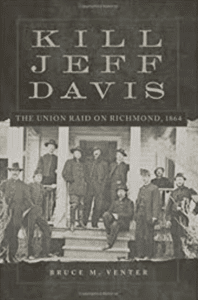 The goal of the controversial Kilpatrick-Dahlgren Raid on Richmond (February 28–March 3, 1864) was to free some 13,000 Union prisoners of war held in the Confederate capital. But orders found on the dead body of the raid’s subordinate commander, Colonel Ulric Dahlgren, point instead to a plot to capture or kill Confederate president Jefferson Davis and set Richmond ablaze. What really happened, and how and why, are debated to this day.

Bruce M. Venter’s major interest is Civil War cavalry with an emphasis on the career of Union general Judson Kilpatrick. He frequently lectures on the cavalry and has led bus tours on the Kilpatrick-Dahlgren raid, the focus of his book, Kill Jeff Davis. In 2012 he participated in a re-enactment of Dahlgren’s raid thru Goochland County where he rode with over 80 troopers for three days, serving as their historian. He is a past president of the Richmond Civil War Round Table and currently serves as 1st vice president of the Goochland County Historical Society. He is president of America’s History, LLC, a tour and conference company which he founded in 2010. He lives in Goochland County, Virginia.

Light refreshments will be served. There is a $5 suggested donation to attend. Speakers with books will be signing after their talks. The museum, bookstore and gift shop will be open.