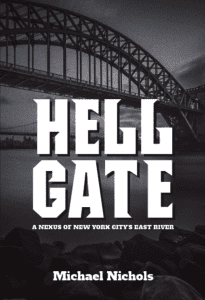 Part history and part memoir, Hell Gate tells of excursions along and through Hell Gate, a narrow stretch of water in New York City’s East River, notorious for dangerous currents, shipwrecks, and its melancholic islands and rocks.

Drawn to the area by his fascination with its name — from the Dutch Hellegat, translated into English as both “bright passage” and “hellhole” — what begins as a set of casual walks for Michael Nichols becomes an exploration of landscape and history as he traces these idyllic and hellish images in an attempt to discover Hell Gate’s hidden character and the meaning of its elusive name.

Using a loosely constructed set of sketches organized as a kind of tour along the edge of the river and then from a rowboat in the river, Nichols describes scenes and events as they present themselves, mixing history and lore with contemporary scenes.

Michael Nichols lives in Manhattan. This is his first book.