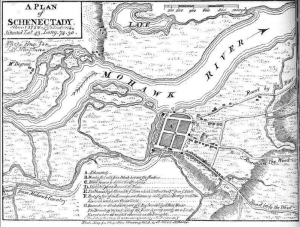 The Fort Plain Museum is set to host “The ‘Willigee Negroes’: Sir Peter Warren, Sir William Johnson and the First Permanent Settlement in the Mohawk Valley West of Schenectady” by Daniel T. Weaver, on Thursday, October 25th at 7 pm.

The presentation will include information about the Willigee Patent, believed to be the first permanent European settlement in the Mohawk Valley west of Schenectady, and its earliest settlers—the Coppernol, Van Olinda, and Phillips families. Evidence will be presented concerning the identity of the “Willigee Negroes” mentioned in Sir William Johnson’s Papers as well as William Johnson’s relationship with them during his first years in America.

Dan Weaver’s interest in the history of the Mohawk Valley began when as a teen he stumbled upon Walter Edmonds’ books in the Bangor Maine Public Library. Dan earned a B. A. and M. A. in English with a minor in history from the University at Albany. He owns a used and antiquarian book store in Amsterdam, is a past president of the Historic Amsterdam League, a trustee of Old Fort Johnson and writes a local history column for the Amsterdam Recorder.

Light refreshments will be served. There is a $5 suggested donation to attend. Speakers with books will be signing after their talks. The museum, bookstore and giftshop will be open.