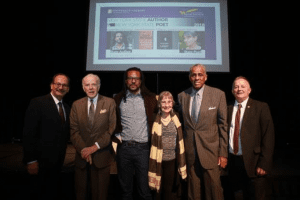 On Friday, September 28th, SUNY Board Chairman H. Carl McCall presented the New York State Author and State Poet Awards. These awards were instituted in 1985 when Governor Mario Cuomo and the State Legislature empowered The New York State Writers Institute, located at the University at Albany, to award the Edith Wharton Citation of Merit for Fiction Writers (State Author) and the Walt Whitman Citation of Merit for Poets (State Poet) to authors whose career achievements warranted distinction.

The citations are awarded every two years to one fiction writer and one poet of excellence. During their two-year terms the state laureates promote and encourage fiction writing and poetry throughout New York through public readings and appearances.

Colson Whitehead was selected as the 2018-2020 New York State Author. He is the author of six novels and is celebrated for work that wrestles in heroic fashion with the meaning of American mythology, history and racial identity. Whitehead’s most recent novel is The Underground Railroad (2017), an imaginative “alternate history” of pre-Civil War America, with its network of safe houses and secret routes for escaped slaves. This novel won the 2017 Pulitzer Prize in Fiction.

Alicia Suskin Ostriker was selected by Governor Cuomo as the 2018-2020 New York State Poet. She is the author of sixteen volumes of poetry and is one of the most acclaimed poets of her generation. Ostriker’s work explores motherhood, womanhood, social justice and Jewish identity. Her newest collection is Waiting for the Light (2017), winner of the National Jewish Book Award, and a current reflection on life in New York City, America and the world.