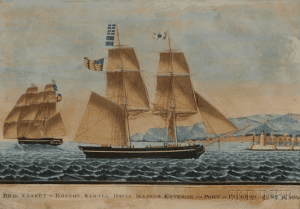 “Life of William Grimes, the Runaway Slave” a 68-page pamphlet self-published in the city of New York in 1825, begins with a note addressed “TO THE PUBLIC.” In the introductory note, Grimes explained:

“Those who are acquainted with the subscriber, he presumes will readily purchase his history. Those who are not, but wish to know who Grimes is, and what is his history, he would inform them, generally, that he is now living in Litchfield, Connecticut, that he is about 40 years of age, that he is married to a black woman, and passes for a negro, though three parts white; that he was born in a place in Virginia, has lived in several different States, and been owned by ten different masters; that about ten years since, he ran away, and came to Connecticut, where, after six years, he was recognized by some of his former master’s friends, taken up, and compelled to purchase his freedom with the sacrifice of all he had earned. That his history is an account of his fortune, or rather of his suffering, in all these various situations, in which he has seen, heard, and felt, not a little.”

The note is important to readers for a number of reasons. Because the body of the pamphlet does not include a clear chronology, the note establishes that Grimes probably made his escape from enslavement and arrived in the city of New York in 1814. We also learn about his racial background, although his parentage is largely white, in the North he “passed” as Negro,” that he was sold multiple times, that in Connecticut where he lived as a free man he married a “black woman,” that while in Connecticut, probably in New Haven, he was recognized by students, most likely Southerners attending Yale University, and one of his former “master’s” friends, which led to threats of him being returned to slavery in the South. Fortunately, Grimes was able to purchase his freedom, but this left him impoverished.

Grimes starts the actual narrative with the story of his birth and a statement about the hypocrisy of a country “whose motto is Liberty and Equality,” yet is rooted in slavery. He tells his readers:

“I was born in the year 1784, in J–, County of King George, Virginia; in a land boasting its freedom, and under a government whose motto is Liberty and Equality. I was yet born a slave. My father,–, was one of the most wealthy planters in Virginia. He had four sons; two by his wife, one, myself, by a slave of Doct. Steward, and another by his own servant maid. In all the Slave States, the children follow the condition of their mother; so that, although in fact, the son of–, I was in law, a bastard and slave, and owned by Doct. Steward.”

Grimes began the story of his escape from slavery: “I have experienced the sufferings of a slave in the Southern States. I have travelled from Frederickstown in Maryland, to Darien in Georgia, and from there to Savannah, from whence I made my escape in the following manner.” Grimes was able to escape from the deep South to New York via a cotton shipment with the help of sailors, both black and white.

His story is of special interest because it illustrates the networks binding the North to the slave system of the South.

In Savannah harbor, Grimes was assigned to help load the brig Casket, a two-masted, square rigged vessel, recently arrived from Boston, with a shipment of cotton bales destined for New York. While working on the docks, Grimes became “acquainted with some of these Yankee sailors.” As firendships developed, the sailors “proposed to me to leave in the centre of the cotton bales on deck, a hole or place sufficiently large for me to stow away in, with my necessary provisions.” Grimes, with some supplies, was smuggled on board and remained hidden in this place until the ship arrived “at the quarantine ground New York,” although after dark he was sometimes able to sneak out on deck and merge in with the sailors, who were of “different complexions.” The brig was forced to wait at the quarantine station, a small island in New York’s lower harbor, because some of the crew was sick and had to be examined by a doctor before the ship would be approved to land and be unloaded.

While the ship was quarantined, Grimes ventured out on deck during the day and was discovered by the ship’s First Mate. Concerned that Grimes would be reported as a stow-away and runaway slave by medical inspectors, he ordered some of the sailors who had befriended him to row Grimes ashore on Staten Island. One of the sailors then introduced Grimes to an acquaintance who promised to get him onto a packet boat that would bring him to Manhattan. This sailor helped Grimes evade medical inspectors at the Staten Island wharf. Once in the city proper, the sailor brought Grimes to his own lodgings. Grimes, freshly experiencing freedom, was anxious to explore the city, a decision that quickly placed him in renewed danger. He reports:

“In the course of the afternoon I saw a coloured girl near the house in the street, I enquired of her if she would walk with me a little ways, in order to see the town, and that I could again find my lodgings. I being a stranger there was afraid of being lost. We walked about the city some time; at length, as we were walking up Broadway, who should I see but Mr. Oliver Sturges, of Fairfield, who once had been my master in Savannah.”

But Grimes was lucky in this encounter. Sturges recognized him, but accepted Grimes’ explanation that he was in the city, where slavery was still not banned, legitimately. Frightened by the encounter, Grimes decided he had to leave New York.

“The next morning, after purchasing a loaf of bread, and a small piece of meat, I started on foot for New-Haven. I could often get an opportunity to ride; sometimes behind the stage, at others, I could sometimes persuade a teamster to take me on for a short distance. In this manner, I arrived at New-Haven. After I arrived there, and even before, every carriage or person I saw coming behind me, I fancied were in pursuit of me.”

In Connecticut, Grimes found work as a barber, married, and purchased a house, but six years after escaping to freedom, he was again recognized as a runaway and this time he was threatened with being returned to slavery in the South. In the narrative he recounts:

“After I returned to Litchfield, Mr. Thompson came on as I had anticipated, with power from my master, to free me or take me back. He said he would put me in irons and send me down to New-York, and then on to Savannah, if I did not buy myself.”

Grimes was forced to sell his home and borrow additionally money, but with these funds he was able to purchase his freedom and protect his family. At the conclusion of the narrative, Grimes again excoriated the hypocrisy of the system he was forced to live under in the United States.

“To be put in irons and dragged back to a state of slavery, and either leave my wife and children in the street, or take them into servitude, was a situation, in which my soul now shudders at the thought of having been placed . . . I was undoubtedly the lawful property of my master according to the laws of the country, and though many would justify him, perhaps aid in taking me back, yet if there is any man in God’s whole creation, who will say, with respect to himself, (only bring the case home) that there are any possible circumstances in which it is just that he should be at the capricious disposal of a fellow being, if he will say, that nature within him, that feeling, that reason tells him so, or can convince him so, that man lies! The soul of man cannot be made to feel it, to think it, to own it, or believe it. I may give my life for the good or the safety of others. But no law, no consequences, not the lives of millions, can authorize them to take my life or liberty from me, while innocent of any crime.”

The full narrative of William Grimes is available online from the University of North Carolina at Chapel Hill at Documenting the American South.