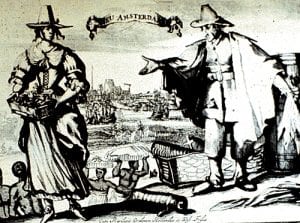 In the 17th and 18th century, as New Amsterdam grew from a trading post into a village, a village into a town, and then a town into the port city of New York, its wealthiest residents were financially invested in the trans-Atlantic slave trade. And because they were among the most prominent of its early citizens, many of the city’s oldest streets are named after slaveholders and slave traders. An online database, New York Slavery Records Index, created by the John Jay College of Criminal Justice of the City University of New York, opens this forgotten history to public view.

During the past year a mayoral commission held public hearings and recommended that a statue of James Marion Sims, a 19th century American physician who experimented on enslaved African women, be removed from the Central Park wall at 103rd street and 5th Avenue in the City of New York. Unfortunately, the commission ignored much of the city’s deep connection to slavery and the trans-Atlantic slave trade.

Among the most prominent slave traders listed in the data are father and son Nicholas (1644-1707) and Samuel (1669-1746) Bayard. The elder Bayard was the mayor of New York City under the English from 1685 to 1686 and a nephew of Dutch colonial superintendent Peter Stuyvesant, the largest private slaveholder in the Dutch colony.

Samuel was a member of the colonial assembly and related through marriage to the prominent slaveholding Van Cortlandt, Van Rensselaer, and Schuyler families. Nicholas and then Samuel owned and operated sugar mills processing slave-produced commodities in the city. The Bayard’s owned stakes in at least eight slave-trading ships. There are Bayard Streets in lower Manhattan, Brooklyn, and Staten Island, and in the Westchester County towns of New Rochelle and Larchmont.

Mary Bayard, the daughter of Nicholas Bayard III, married William Houstoun in 1786. Houstoun had been a member of the Continental Congress from Georgia, where he and his family members were slaveholders, and was a delegate to the Constitutional Convention. Mary’s father gave the couple land from the Bayard estate. A path through the estate eventually became Houston Street.

In lower Manhattan there is a Beekman Street, a Clarkson Street, and a DeLancey Street. Beekman Street, near New York City Hall, is named after Gerardus Beekman, a wealthy physician, landowner, slave trader, and a colonial governor of the Province of New York. Beekman owned an estate in Flatbush, Brooklyn and farms in New Jersey.

DeLancy Street is named after the Delancy family, whose patriarch, Stephen Delancy, originally known by his French name Etienne de Lancy, owned shares in at least four slave-trading vessels. Through marriage, the Delancys were related to the Van Cortlandts and the Schuylers.

In lower Manhattan there are also DePeyster, Duane, Moore, Mott, Pike, Reade, Rutgers, and Vandam streets, and a Cuylers Alley, all named after investors in the slave-trade. Rip Vandam (also spelled Van Dam) was the 23rd colonial governor of the British Province of New York from 1731-1732. There are Vandam Streets in Brooklyn and Queens as well.

Schermerhorn is a small town in northern Holland and the Schermerhorn family is one of the more prominent Anglo-Dutch families in New York history and they have a major street named after them in Brooklyn. Arnout and John Schermerhorn are both on the list as investors in the slave trade.

A new study of 50,000 U.S. monuments includes some insight on what “history” is being saved in the public square. Although not referring to street names, the findings on monuments are instructive.  You can read that story here: https://www.newyorkalmanack.com/2021/10/list-of-americas-public-monuments-reveals-one-sided-history-obsessions/

You can also find an A-Z list of NYC streets named for slavers here: https://www.newyorkalmanack.com/2021/10/manhattan-street-names-tied-to-slavery-from-a-to-z/