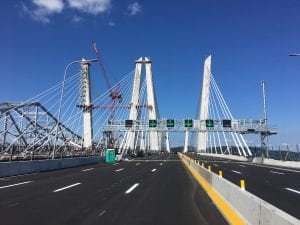 What can we learn from the controversy over the naming of the Tappan Zee Bridge? What lessons can be drawn by looking at the larger picture? I recently examined the issue by starting with the above-the-fold headline in my local paper on August 31, 2018:

The article recounted the ongoing struggle to preserve the historic name of Tappan Zee Bridge rather than rename the bridge after former Governor Mario M. Cuomo. The former bridge could be located in one and only one place; the latter bridge could be located anywhere in the state. Signs to the Tappan Zee Bridge still exist on the highways and byways, references on the internet, and in our minds. The article ends by mention current Governor Andrew Cuomo’s remark in the recent gubernatorial debate, when he too referred to the bridge as the Tappan Zee.