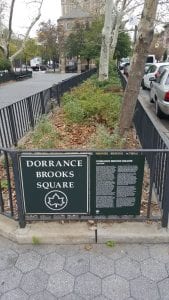 A 100th Anniversary Observance of the armistice ending the First World War has been set for Saturday, November 10, 2018 at 11 am at Dorrance Brooks Square Park on Edgecombe Avenue in Harlem.

The segregated 369th United States Infantry, also known as the “Harlem Hellfighters,” assigned to fight in the French Army’s 161st Division, served 191 days in front line trenches in France, more than any other American unit, and also suffered the most losses of any American regiment with approximately 1,500 casualties.  Soldiers fought on two fronts, domestically and internationally, to show both their bravery and patriotism to defend America as well as their efforts to have the respect and rights as full citizens free from racial discrimination.

“This hour is dedicated to the memory of Dorrance Brooks. He died for us, with faith in his heart and hope on his lips.,” New York Mayor John Francis Hylan said in his June 14, 1925 speech dedicating Brooks Square. “This square … will speak to the present and future generations of the idealism, heroism and patriotic duty of the colored man when danger threatened our country… let us see in his sacrifice… the obligation to strive… for the victories of peace…”

There will be many local organizations participating in the observance on November 10, including local block associations, the 369th Historical Society, the 369th Veterans Association, the French Consulate, the Boy Scouts of America, Kappa Alpha Psi fraternity, the VFW Dorrance Brooks Post 528, various other military organizations, and more.

The event is being organized by the Dorrance Brooks Property Owners & Residents Association.