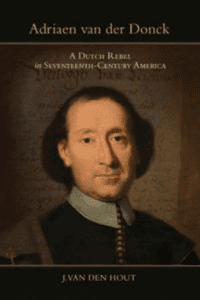 The Albany Institute of History & Art is set to host author Julie van den Hout on Sunday, September 23 at 2 pm for a lecture on her book Adriaen van der Donck, A Dutch Rebel in Seventeenth-Century America. This lecture is co-sponsored by the New Netherland Institute and is included with museum admission.

Adriaen van der Donck, A Dutch Rebel in Seventeenth-Century America focuses on Adriaen van der Donck, a young legal activist from the seventeenth-century Dutch colony of New Netherland. The book details his life from his childhood and education, but it focuses on his battle to bring his struggling colony’s complaints with the Dutch West India Company to the highest level of government in the Dutch Republic. It also delves into the changes he brought long after his death, as well as discussing his book, Description of New Netherland, which contains his vision for the country.

Guest lecturer Julie van den Hout will tell the story of Adriaen van der Donck, what made him a pivotal figure in early America, and why three centuries after his death, he remains an intriguing character.

Julie van den Hout is a graduate of the University of California, Berkeley and holds a Bachelor of Arts degree in Linguistics and Dutch Studies. She is an independent scholar with a passion that lies in seventeenth century Dutch. Adriaen van der Donck, A Dutch Rebel in Seventeeth-Century America is her first book.

The Albany Institute of History & Art is located at 125 Washington Avenue in Albany, New York. Free parking is available in the museum’s lot at the corner of Elk and Dove Streets. For more information, visit their website or call (518) 463-4478.