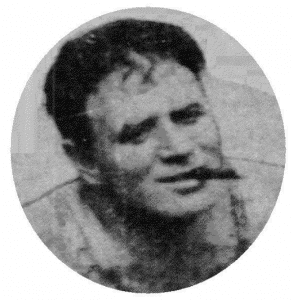 On August 23, 1937 a physician checked out Charles Zimmy at the Albany Yacht Club, which was located at the bottom of State Street hill. The doc’s approval having been given, some young men from Albany applied a thick layer of grease to Zimmy’s body, he lit a cigar, and hopped off a pier into the water of the Hudson River. As he bobbled a bit in the water, he lost his cigar. That wasn’t a problem, though, as there was a supply of 200 aboard the Penguin, a 50-foot boat which would shadow him as he made his way south towards New York City. The cigars, Zimmy told a reporter, were as much a necessity as the watertight goggles he wore during his swim.

According to an article in the Times-Union on August 24, Zimmy anticipated losing about 80 pounds during the challenge, which he thought would require him to swim the equivalent of 200 miles – more than the actual distance from Albany to Manhattan – because tides would sometimes push him back upstream, through water he’d already swum. He’d be swimming day and night, catching sleep an hour at a time while floating on his back.

The swim would be extremely challenging. It was made even more so by the fact that Zimmy had no legs. He lost them – except for small stumps below his hips – when as a young boy he fell under a Chicago streetcar. He handled his disability well, working as a newsboy and developing athletic capabilities.

At Christmas time in 1909, he gave an acrobatic demonstration to boys being kept at a home for juvenile delinquents, and told them: “Don’t chew. Don’t smoke. Don’t steal. Be good. Mind your elders. Stay away from bad company.” He may not have entirely heeded his own advice, though, because the 1910 census lists him among the “residents” of the Cook County Jail. And, of course, he became a cigar smoker.

Zimmy’s real last name was “Ziebelman,” or something like that, as various spellings appeared in newspapers over the years. He was born in 1893, either in Russia or Chicago (there is conflicting documentary evidence). Not long after the streetcar accident, he took up swimming and worked the vaudeville circuits.

He was billed in various ways during his show business career: The Legless Wonder, The Human Fish, The Human Submarine. As part of his act, he did schlocky things like “smoking” a cigar underwater (he’d blow bubbles to simulate smoking a stogie). In 1927, Zimmy (as he was known), performed at a theater in Westchester County, appearing in a water-filled tank and also on stage. The Mount Vernon Argus described him as being “happy, full of pep at all times and a good comedian…”

Zimmy was quite adept at working around his disability. He drove himself around in an automobile with adapted control mechanisms, and when not in his car, he used his arms to push himself along on a roller skate. He did not believe that having no legs was a drawback when it came to swimming, explaining that legs were mere dead weight in the water, and that, with no legs, his heart could more easily pump blood to the rest of his body. 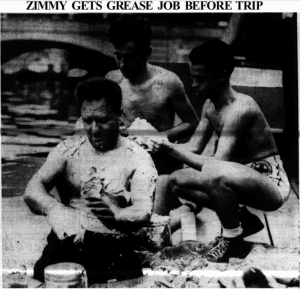 Besides the stunts he performed before audiences, Zimmy undertook challenging swims – sometimes successfully, sometimes not. He’d swum the Golden Gate in less than one hour, and set an endurance record in 1931 by swimming continuously in a pool in Honolulu for over 100 hours. After that, he made several attempts to conquer the English Channel, but always came up short (once because he was stung by a jellyfish).

In the late 1920s and early 1930s, he traveled the world, giving exhibitions in major cities. On his return to the U. S., he felt that Americans had forgotten him somewhat, so came up with the idea of swimming the Hudson River. He was on his home turf (or perhaps more accurately, his home “water”), since he had previously resided in Manhattan where his two children had been born.

On the second day of his Hudson River swim, Zimmy had only reached Coxsackie, and friends, worried over his slow pace, shouted for him to give up the whole project. “No,” he yelled back. “I’m going right on to the George Washington Bridge.” Tides had a great impact on his progress. A small item in the New York Times on August 26 noted that the tide had pushed him back six miles, so that he’d had to swim past Saugerties for a second time.

All along the way, Zimmy entertained onlookers on the river banks or on boats. When he’d started out, he joked that, after reaching New York, he might turn around and swim back – all the way to Lake Champlain. At Kingston, he reported feeling “fit as a fiddle.” Near Poughkeepsie, he asked a reporter to convey a message to President Roosevelt at Hyde Park: “I salute you from the waters of the Hudson.”

Peekskill marked an important waypoint, as it was near that city that he’d been in the water for 102 hours – surpassing the 100-hour record he’d set in 1931. On August 29, the Times observed that “every thrust of his sturdy arms” brought him closer to the metropolis. He was then at Rockland Landing, where he enjoyed some badly needed sandwiches – and cigars. People cheered him, and some even jumped into the water with him. As he passed Hook Mountain – a mere 29 miles from the city – Zimmy scoffed “What’s 29 miles? I’m getting near home now and pretty soon I’ll be there.” Despite an upset stomach and hands that were raw from being exposed to the water, Zimmy reported feeling better than at any time up to that point.

Finally, the water warrior arrived at New York, passing under the George Washington Bridge at 9 pm on August 29. About an hour later, he reached his intended stopping point: the 125th Street ferry landing – but was dragged a mile past it by a strong current. Near 98th Street, a rowboat went out to retrieve him and take him back up to 129th Street, where an ambulance waited to carry him to Harlem Hospital. He performed a few dives for the benefit of several hundred spectators, then was whisked away to get checked out by doctors. As his trip of approximately 145 miles came to an end, the Times stated that “Zimmy’s record probably will stand as a unique accomplishment.” It also mentioned Zimmy’s idea for another excursion – to swim from Key West to Havana, Cuba.

Zimmy left the hospital after a short stay (in spite of doctors’ concern that he had a slight fever), But Zimmy felt fine, and headed to his home on 10th Avenue. In the end, he’d lost only 26 pounds, much less than the 80 he had expected to lose. His effort earned him a certain amount of notoriety: a photo spread in Life magazine, and a radio interview for Ripley’s Believe It or Not.

Various articles about Zimmy are available on a number of web pages (including a 2010 item, “Recalling a Legless Daredevil,” from the Washington Post’s Post Mortem column). But they lack information on his later (i. e., post-Hudson) life. The swim to Cuba apparently never happened, as there are no news reports of it actually being undertaken. (Zimmy did do some initial planning for it, including thinking he’d need a crew of 150 people – lifeguards, medical personnel, and even sharpshooters to keep sharks away – who would shadow him.) In the early 1940s, he was back in Hawaii, where he performed in a circus. In 1941, he broke a swimming record (which had been set by him with his Hudson River swim) when he spent over seven continuous days in the natatorium in Honolulu.

Not long after that achievement, he moved to Norfolk, Virginia, where he ran some hot dog stands, beer parlors, and a delicatessen. From time to time, he still gave swimming exhibitions, primarily for war veterans. In an interview in 1948 – in which Zimmy told about his plan to swim across Chesapeake Bay – he explained that during the time he ran a bar, he was always able to keep his customers in line. His height allowed him good opportunity to punch an unruly patron in the stomach – and if that failed, he’d grab the person’s legs and drag him to the floor. “Once he was on the floor, he was my size and I could handle him easy from there,” Zimmy said.

His Chesapeake swim never happened, due to his inability to arrange sponsorship. Zimmy died from a cerebral embolism in November 1952, and is buried in Norfolk’s Forest Lawn Cemetery. There is a photo of his tombstone on the Find-a-Grave site. A newsreel from 1938, available on YouTube, includes footage of Zimmy demonstrating his prowess and doing some of his stunts.