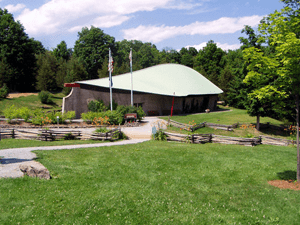 On Sunday, September 30, 2018, the Mount Independence State Historic Site in Orwell, Vermont, is set to host a talk by living historian Robert Grandchamp on the British 24th Regiment of Foot and their role in the Northern Campaign of the American Revolution. The talk, with a question and answer period, will run from 1 to 2:30 pm, and is included with regular admission ($5 adults/free under 15).

Grandchamp is a member of today’s British 24th Foot living history reenactors. He will talk about how this elite Advanced Corps for Lt. General John Burgoyne played an important role in the Revolution. They were one of ten infantry regiments with Burgoyne, were at Mount Independence and Hubbardton, had a detachment at Bennington, and fought at Saratoga.

Attendees can visit the museum and walk any or all the six miles of trails on the over 300-acre site.