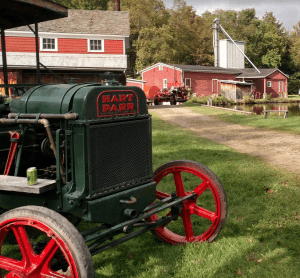 The 35th annual Dan Rion Memorial Antique Engine Jamboree and Powerfest has been set for Saturday, September 8th from 10 am to 4 pm at the Hanford Mills Museum. The Museum grounds will be filled with the rumbles and whirs of antique tractors, cars, trucks, motorcycles, outboard motors, hit and miss engines, water-cooled and air-cooled gas engines.

The machines on exhibit, many dating back to the early 20th century and some to the 19th century, were used for a variety of tasks, including crushing rocks, sawing wood, pumping water, and mixing cement. Antique vehicles, including a 1910 Indian motorcycle, a 1925 Model T Ford, a 1926 Ahrens Fox fire pumper, a 1928 Franklin, 1930 Ford Model A Fordor, and a 1933 Ford pickup truck, also will be featured. The Jamboree includes members of the Southern Tier Antique Gas and Steam Engine Club, the Mohican Model A Club, Antique Outboard Motor Club, Hudson Mohawk Chapter of the Pioneer Gas Engine Association, the Franklin Doodlebug Club, Tired Iron of Butternut Valley, the Model T Ford Club of America. Some of the oldest machines on display include a 1870s treadle lathe, and a Barnes hand-cranked ripsaw from the 1880s. There also will be model engines and remote control model boats on the Mill Pond. Roger Ree will offer rides on the 1957 Metropolitan Nash Hook and Ladder Fire Truck ride from the Catskill Game Farm.

During World War II, new tractors were scarce, so people fashioned tractors from old cars. These homemade tractors were called doodlebugs. Members of the Franklin Doodlebug Club will participate in the Jamboree with a 1928 Chevy Doodlebug, and two 1931 Model A Ford Doodlebugs.

The SUNY Oneonta A.J. Read Science Discovery Center will have a hands-on display on energy, which includes a Stirling fan. The Northeast Classic Car Museum will bring their 1928 Franklin and have information about their collection. The Museum’s Learning Lab will be open and have blocks, gears, and simple machines for children to play with. The Stoddard Hollow String Band will play from 11 am to 3 pm, and local vendors will be selling BBQ and pie. Visitors also are welcome to bring a picnic.

Hanford Mills Museum’s 70-acre site will be open to explore. The Jamboree is included with regular Museum admission, which is free for children 12 and under, Museum members, and EBT cardholders.