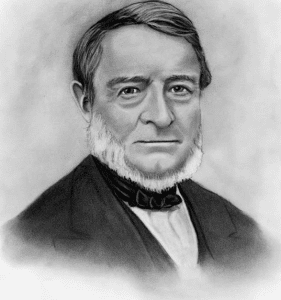 Samuel J. May is set to be inducted to the National Abolition Hall of Fame and Museum (NAHOF) on Saturday, October 20, 2018 at ceremonies held at 5255 Pleasant Valley Road in Peterboro.

At 3:30 pm Roger Hiemstra will present a program on May during the afternoon Abolition Symposia, and at the 7 pm Induction Ceremonies Mary Louise Edwards will officially nominate May to the Hall of Fame, and sponsors will unveil May’s banner which will be installed in the Hall of Fame. A second May banner will also be available for outreach exhibits.

Rev. Samuel J. May, Jr. (1797-1871) was born into a well-connected Boston family. He graduated from Harvard University and became a Unitarian minister. William Lloyd Garrison converted May to immediate abolitionism in 1830. May assisted Garrison in founding the New England Anti-Slavery Society and was a founding member of the American Anti-Slavery Society.

In 1835, May accepted a ministerial post in Syracuse, NY. There he became acquainted with both Sojourner Truth and Harriet Tubman. His involvement in the cause of abolition made him a nationally prominent activist. May, along with Gerrit Smith and Jermain Wesley Loguen, were instrumental in the 1851 rescue of the runaway slave William “Jerry” Henry, arrested under the Fugitive Slave Act.

May assisted hundreds of fugitive slaves and served as president of the Syracuse Fugitive Aid Society. He recognized that racial prejudice, not only financial self-interest, perpetuated slavery in the U.S. He was dedicated to racial equality, not just abolition, and championed a wide variety of reform causes. He was a moral giant ahead of his time.

Don Milmore submitted the nomination of Samuel J. May for the May Memorial Unitarian Universalist Society in Syracuse. Roger Hiemstra PhD, Professor of Adult Education Emeritus, Syracuse University and former chair of the History Committee of May Memorial, will present abolition symposia program on May at 3:30. Mary Louise Edwards PhD, Professor of Communication Sciences and Disorder, Syracuse University, and Chair of the History Committee at May Memorial will provide the ceremonial nomination at the 7 pm evening program.

The public is encouraged to participate in all or parts of the Induction Weekend on Saturday and Sunday October 20 and 21. Registration opens at 8 am Saturday morning October 20 at 5255 Pleasant Valley Road. At 9 am Norman K. Dann PhD, biographer of Gerrit Smith, will conduct a tour of the Gerrit Smith Estate National Historic Landmark, and NAHOF Cabinet of Freedom members will host a tour of the Abolition Hall and Museum at 10:30. Both tours will be provided at the same time on Sunday morning for persons unable to attend the Saturday tours.

The Annual meeting for NAHOF members will be held at 11:00 am on Saturday. At 12:30 pm the Peterboro United Methodist Church will serve a sandwich buffet at NAHOF. At 1:15 pm the Abolition Symposia will begin with opening remarks and announcements, followed directly by Marcia C. Robinson’s presentation on Frances Ellen Watkins Harper. At 2:30 pm James L Dumouchel will present on inductee Laura S. Haviland, and at 2:30 Roger Hiemstra will provide a program on inductee Rev. Samuel J. May.

At 5 pm Michael’s Fine Food and Spirits will serve a 19th Century inspired dinner featuring four entrée selections. Reservations must be made by October 5th.

At 7 pm the Induction ceremonies will be held in the Hall. The Hall of Fame banner for each inductee will be unveiled by the sponsors of the banner following a brief introduction of each inductee. Banner sponsorships of seventy-five dollars are due September 10 with name and affiliation to the inductee. Event registrations are due October 5 to NAHOF, 5255 Pleasant Valley Road, Peterboro NY 13134.