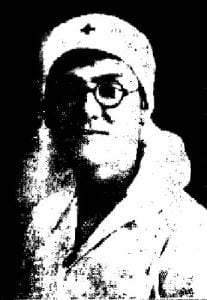 That’s what nurses did, risking their lives to comfort, save the lives of, or ease the deaths of, soldiers. Which explains why so many wounded men referred to nurses as the real heroes. A fine example of that circumstance, with an unusual twist or two, involved Ruth Williams of Ogdensburg.

She was born in September 1891, was an excellent student, and graduated from Ogdensburg Free Academy (OFA) in 1911. Her sister lived in South Hadley Falls, Massachusetts, and after a visit there in summer 1913, Ruth began attending the Holyoke Hospital School of Nursing, less than two miles away in Holyoke, on the opposite side of the Connecticut River. She graduated in 1915 with high honors, received one of three efficiency prizes awarded to three classes of nurses, and found employment at Massachusetts General Hospital in Boston. Hometown ties were maintained by frequent visits to Ogdensburg, where her father, Louis, was a lifelong railroad engineer and very well known locally.

On April 6, 1917, the United States joined the war in Europe. As many hospitals did, Massachusetts General joined the Red Cross in forming medical teams that served overseas in support of American troops. Ruth volunteered, becoming part of a unit comprised of 25 doctors, 75 nurses, and 130 enlisted men that would form Base Hospital No. 6. Departing from New York City, they landed at Bordeaux, France, on July 28.

Far away from the fields of war, they were the rear guard for American fighters, where men were comforted, mended, and given hope that all might end well. It was a difficult job that Ruth performed for eight months before volunteering for duty at the front. Experience had given her some idea of what to expect, but the realities of war were shocking to the sensibilities of everyone.

Leaving the rear guard, she journeyed more than 400 miles from southeastern France to the northeast, settling in at Toul, about 20 miles from the German border during the war. (The French border was extended farther to the northeast to include Toul after the war ended.)

About 30 miles northeast of Toul was Metz, the site of a hospital behind German lines. An agreement was struck whereby neither side would attack hospital sites, but as Ruth soon learned, there were subtle ways to circumvent the pact. Air strikes occurred daily, some of them targeting the American hangar close by the hospital. Should the medical facility be “accidentally” damaged or destroyed, so be it.

But Toul itself was an attack magnet, hosting 45 squadrons and serving as the main base for the army’s Air Service, forerunner of the US Air Force. Countless practice flights and combat missions were launched there, making it an attractive target for German pilots.

Under those conditions, with shelling, bombing, and gunfire everyday occurrences, Ruth and other nurses tended to injuries running the gamut from minor physical setbacks to lost limbs, eyes, and minds. They plugged away, night after terrible night, day after exhausting day, while witnessing the stuff of nightmares. No wonder wounded fighters saw them as heroes.

In August 1918, the US 307th Field Signal Company was serving in the Toul sector when a seven-man detachment, with enough food and water for a limited foray, were pinned down by German troops for 36 hours. Suffering terribly from thirst, two of them tried to access a creek, but one disappeared and the other was shot. The remaining four successfully reached the water before returning to their safe position for pickup. While waiting, they were suddenly beset with violent symptoms and rendered unconscious. Only later was it learned that the enemy had poisoned the creek.

When one of the four, Ogdensburg’s Private Edgar Martin, awoke after surgery, he found himself in good hands — those of Ogdensburg’s Ruth Williams! Considering all the places each of them could have landed in war-torn Europe, it’s remarkable that two Ogdensburg folks were united in a small city hospital in northeastern France. (At least two of the other three men died from the poison.)

The Ogdensburg Republican-Journal reported on Private Martin’s comments about Nurse Williams. “The hospital where she was stationed was frequently under fire, but despite the constant danger, the young nurse went about her work fearlessly and earned the lasting gratitude of all to whom she ministered. In recognition of her heroism, she was awarded a military decoration. Private Martin said he could not too highly praise the splendid work done by Miss Williams, and that she was deserving of the greatest rewards.” She did, in fact, receive awards for her work from French and American authorities.

About a month later, Mr. and Mrs. Matthew Adams of Ogdensburg received a letter from their son, Matthew, who was recuperating in a hospital in France. It was their first notice that he had been injured, but Adams, who would be laid up for some time, said not to worry because he was in good hands — those of Ogdensburg’s Ruth Williams!

It had happened again — not only twice, but twice within a month — that she cared for a hometown boy from Ogdensburg. What are the odds? I couldn’t tell you, but with millions of servicemen and hundreds if not thousands of medical units, astronomical is my best guess.

Four months following the war’s end, Ruth returned to America after 22 months of service in Europe. The hometown newspapers touted her a hero, based partly on the comments of Adams and Martin, who sang her praises for helping them and others through very difficult times.

Toul was known among American officials for the importance of its hospital to the fighting men, and as such, it was visited by high-profile leaders. During her time there, Ruth met the highly decorated General George Duncan, American Secretary of War Newton Baker, and Captain Archie Roosevelt, son of Theodore and a distinguished officer in his own right. Toul’s most famous visitor was a leader from the top: General John J. Pershing, Commander of the American Expeditionary Force (AEF) in Europe.

But for two young American soldiers from Ogdensburg, those luminaries all took a back seat to meeting Nurse Ruth Williams, a real hometown hero with a heart of gold.