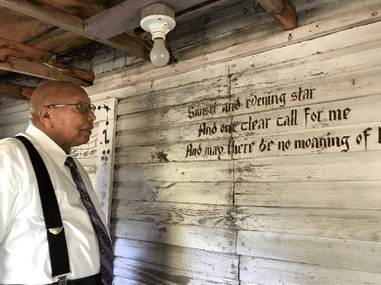 Adirondack Experience, the Museum on Blue Mountain Lake, has announced a new acquisition on view in its Life in the Adirondacks exhibition: a cramped, dilapidated shack, known as “The Closet” that for two summers was home to a young and talented African-American tenor, Fulton Fryar.

Through the combined efforts of Adirondack Architectural Heritage, the Seagle Music Colony, and Adirondack Experience, this historic artifact was saved from demolition and will help educate museum visitors about the history of racial discrimination in the Adirondack Park. 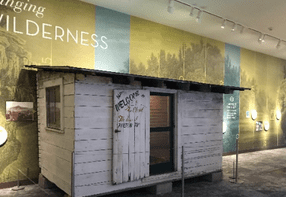 A student at the Seagle Music Colony in Schroon Lake in the summers of 1957 and 1958, Fryar was invited by the colony’s founder John Seagle to travel to the Adirondacks from North Carolina to train and perform. He was the first African-American to attend the prestigious camp. While Fryar’s admission to the all-white camp was a progressive move toward integration in some circles, it was not an uncomplicated one.

Rather than house him in the comfort and comradery of camper bunkhouses, Fryar was separated from the others in a one-room shack off the laundry building that he dubbed “The Closet”. Having worked as a sign painter back home, Fryar put his artistic skills to work, dressing up his dark quarters with bright colors. “Always welcome to ‘The Closet’, the home of Fulton Fryar,” was emblazoned on the front door, and inspirational quotes adorned the walls. Despite his social isolation, Fryar made the most of his time at the music colony, participating in theatrical productions and decorating stage sets while also honing his talent.

His story was recently captured by Mountain Lake PBS and Fryar will appear at Adirondack Experience on the evening of Monday, August 6th, for a panel discussion on racism and the Black experience in the Adirondack Park.

For more information about Adirondack Experience, The Museum on Blue Mountain Lake, call (518) 352-7311 or visit their website.

Photos of Fulton Fryar in The Closet prior to its removal from Seagle Music Colony; and The Closet relocated to Life In The Adirondacks Exhibition at Adirondack Experience, The Museum on Blue Mountain Lake, provided.