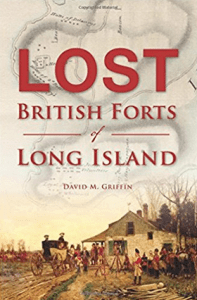 An evening lecture, Lost British Forts of Long Island by David Griffin, has been set for Thursday, August 23rd at 6:30 pm at the Fraunces Tavern Museum, 54 Pearl Street, New York.

When the Revolutionary War broke out and New York City had fallen in 1776, the British forces developed a network of forts along the length of Long Island to defend the New York area and create a front to Patriot forces across the Sound in Connecticut.

Author David Griffin will discuss the network of fortifications on Long Island covered within his book titled Lost British Forts of Long Island, and describe more details regarding his research on a few of the key posts on the island. Attendees can learn about new and ongoing research within the inner city areas of Brooklyn and Queens.

Tickets are $5 for Museum Members, $10 for the public. Includes Museum admission and light refreshments.

For more information or to purchase tickets, click here.