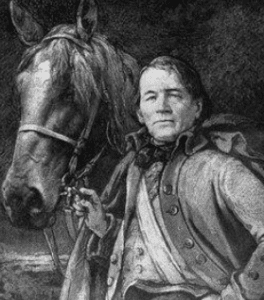 Our story begins in late April of 1790. A former general and spymaster is traveling a dusty and remote country road through sparsely settled Long Island to a small seaside fishing village called Setauket.

The former military man and espionage leader was the highest-ranking officer in the Continental Army. He travels with a small retinue of armed soldiers and cavalry officers. As the chief magistrate of his government, President Washington is too important to his nation and his people to fall into enemy hands.

Though the American President is engaged in serious business, his business is not of a military nature.  Washington was making a tour of Long Island to examine the effects of the British occupation. On April 22, 1790, Washington arrived at the house of Austin Roe, a tavern keeper and secret courier for the Culper ring.  Roe, it’s said, was so enthused to see Washington that he fell from his horse and broke his leg.

Washington’s meeting with Roe and other members of the ring is one of the Culper Spy Ring’s great mysteries, because Washington didn’t mention the exact nature of the encounter in his journals. Colonel Benjamin Tallmadge, Washington’s head of military intelligence during the Revolution and lead spy for the Culpers, omits Washington’s gathering at Setauket altogether in his memoir. It’s also noteworthy that none of the other Culper spies, including Abraham Woodhull, Anna Smith Strong and Caleb Brewster (as well Robert Townsend) left written accounts of their rendezvous with the Commander-in-Chief.

We are left to speculate as to what precisely occurred at Austin Roe’s tavern on that night in April, but it’s likely Washington did discuss the Setauket spies. It was after-all the hometown and base of operations of the majority of the Culper spies (including Col. Tallmadge, Woodhull, Brewster, Roe and Strong).  If Caleb Brewster and Col. Tallmadge both crossed Long Island Sound, from Connecticut to Suffolk County, there is no record. They could very well have stepped ashore at Setauket, as it was not a difficult trip. Connecticut was just across the Sound.

Historians have noted that over the course of the War, Washington spent nearly 2,000 pounds gaining secret intelligence, fully a quarter of his budget.  These spies would prove an effective instrument in ousting the British military, and Austin Roe’s role in the Culper Ring was significant. He was included during the winter of 1778-1779 at the mutual behest of Col. Tallmadge, Brewster and Woodhull.  Roe was born in 1749 to an old Setauket family and was said to have the friendly personality one would expect from a tavern keeper.  In 1775, he had singled himself as a Patriot by signing a petition in Brookhaven Town, that was considered disloyal.  Woodhull and Brewster had also signed.

Austin Roe was catalogued in Col. Tallmadge’s famed Culper codebook as Agent 724.  After September of 1779, when co-messenger Jonas Hawkins ceased his activities with the Culpers, Roe was one of the ring’s most important couriers.  On those few occasions when Roe was unable or unavailable to make the perilous fifty-five mile trip on horseback from Setauket to Manhattan to retrieve dispatches from Culper, Jr. (Robert Townsend) to General Washington, Woodhull filled the job.

Roe’s innumerable journeys down Long Island to the city were dangerous. Once the American forces were driven out in the fall of 1776 by General Lord William Howe and his redcoats, law and order suffered. According to Alexander Rose in Washington’s Spies (2006): “Instead of being treated as liberated territory, much of the island (Paumanok) became a military camp, and the sovereign’s loyal subjects placed under martial law. Corruption became rampant among military administrators, and abuses against persons (civilians, specifically) and property, commonly perpetuated.”

Thieves, Tories, and roving British patrols freely wandered Nassau and Suffolk Counties. Shortly before he had left the Culper Ring in September of 1779, messenger Jonas Hawkins, also of Setauket, was aggressively searched by redcoats and only narrowly missed being detected. In the spring of 1779, Abraham Woodhull was robbed of all his money by highwaymen while on a mission, but the thieves failed to thoroughly search his clothes and missed the secret documents he was carrying. The British suspected a spy network was being run from Long Island however, and they turned up the heat.

All the spies operating during the American Revolution risked the gallows, including Austin Roe. None of Washington’s spies wanted to wind up like their martyred kinsman, Nathan Hale, who risked his life in the autumn of 1776 to secure intelligence for the Continentals, but was discovered and almost immediately hanged.

When Austin Roe  joined the Culper Spy Ring, it was in a vulnerable state. Woodhull, Roe and Hawkins (as well as Anna Smith Strong) were considered unproven and inexperienced “investments,” whereas Benjamin Tallmadge and Caleb Brewster were tried and true “assets.”  Roe was recognized as an ally by Tallmadge and Culper cell-leader Abraham Woodhull  early on.  He was given money by Anna Smith Strong, also of Setauket, to purchase various pricey goods, which she would not have been able to afford as a cover for his travels.

Austin Roe’s story is one that is still being written. In the fall of 2015, Long Island historians came across a letter written by one Nehemiah Marks, a Tory sympathizer and Loyalist soldier. The letter was written during the Revolution and was discovered by filmmaker Mark Sternberg, who then forwarded it to Village of Port Jefferson Mayor Margot Garant. Garant and Long Island historian Georgette Grier-Key designed and promoted a public exhibit at Port Jefferson that included the letter.

Marks addressed his letter to then Head of British Army Intelligence Major Oliver De Lancey who was Major John Andre’s successor in that position. In the letter, Marks accuses Roe family members at Drowned Meadow (Port Jefferson) – Nathaniel Roe and Phillips Roe – of providing aid to Culper spy Caleb Brewster.  It should be noted however, that the letter is not conclusive evidence that the Culpers used Roe’s family as operatives or anything else. If the British were certain of the Roes of Drowned Meadow helping the Culpers, Nathaniel and Phillips Roe would have likely been promptly arrested and possibly executed. Historians should view the Marks letter as circumstantial evidence establishing a connection from Roe’s extended family to facilitating his Culper allies Brewster and Tallmadge. More on this topic is likely to surface from further historical research.

Although Roe did occasionally add to Culper intelligence reports he was principally a courier. It was Roe who had brought back news (via Samuel Culper Junior) that the British Navy was planning an ambush of the French fleet at Rhode Island in July, 1780.  General Henry Clinton was in an armed flotilla and sea-bound for Rhode Island to keep Count Rochambeau’s fleet from landing six thousand French troops there. Washington produced a phony American battle plan to seize the city of New York, news of which he had planted behind behind enemy lines. When General Clinton recalled his force to New York to repel an attack that would not come, the French safely landed on American shores.

After the Revolution Austin Roe continued to operate his Setauket tavern. In 1798, he moved his wife and eight children to Patchogue, on Long Island’s south shore, where he opened another inn, and prospered. It’s said Roe related his connections to the Culper ring to his guests.  He became a captain in the Suffolk County militia in 1787 and lived a full life, dying in 1830 at the age of 81 as one of Suffolk County’s most prominent citizens.