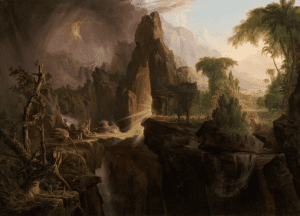 The Albany Institute of History & Art has extended the run of the Thomas Cole’s Paper Trail exhibition to November 28th, 2018. The exhibit was originally scheduled to close on October 28.

In 1818, the youthful Thomas Cole emigrated from his native England to begin a new life in the United States. After several years struggling as an engraver and designer for his parents’ short-lived floor cloth and wallpaper manufactories, he embarked on a career as painter of landscapes and settled in the thriving port city of New York. There he found patrons and a welcoming audience for his works that were exhibited at the National Academy of Design and other venues. Now, during the bicentennial year of Cole’s arrival in the United States, this naturalized American artist is being publicly recognized once again at museums and historic sites on both sides of the Atlantic.

Selections of Cole’s drawings, prints, letters, hand-written poems, and published works, now part of the collections of the Albany Institute, trace the artist’s career from his first tree studies drawn near Pittsburgh, Pennsylvania, in 1823 to letters of condolence sent to his family following his sudden and premature death in 1848. The exhibition also includes the seldom seen painting, View of Featherstonhaugh Estate near Duanesburg (1826), along with two letters written by Cole to his early patron and fellow English immigrant, George William Featherstonhaugh, who invited Cole to spend the winter of 1825/26 at his home near Duanesburg, New York. The painting and letter are on loan for this exhibition from the Featherstonhaugh Family Trust and offer a rare look at Cole’s early commissions.

Other paintings by Thomas Cole and works from fellow landscape artists such as Frederic Church, Asher Durand, and Jasper Cropsey can be seen in the adjoining exhibition The Hudson River School: Landscape Paintings from the Albany Institute of History & Art.

On Sunday, September 16 at 2 pm, chief curator Doug McCombs will give a lecture about the exhibition Thomas Cole’s Paper Trail. The lecture is included with museum admission. Seating is limited and attendees are required to get a wristband from the Admission Desk the day of the lecture. Current admission rates are $10 for adults, $8 for seniors and students with ID, $6 for children aged 6-12, and free for children under 6.

Illustration: Expulsion from the Garden of Eden by Thomas Cole.