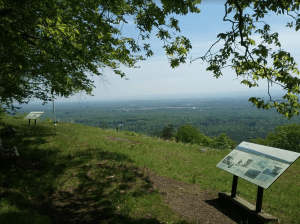 The cottage rests on a quiet and forested hilltop just outside of Saratoga Springs. Visitors need to pass through the barren entrance to a one-time correctional facility, an intimidating experience to say the least. Once through the abandoned guard station, and up the winding rough road, the ground levels out with the neat building on the left.

To the right, a trail to the stunning view of the Adirondacks to the north, the Green Mountains of Vermont to the east, and the Catskills to the south. On a blistering, hot day in July 1885, General and President Ulysses S. Grant was brought by wheelchair to this very spot, cancer was eating away his throat, and he had just completed a 300,000-plus word memoir, and knew death was near. 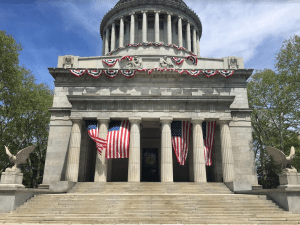 It’s recorded that he was returned to the building, now called Grant’s Cottage, was brought to the bedroom on the ground floor and helped back into bed. After sending his family away to rest, he breathed his last. The time was about 8 am, and as Victorian-age tradition dictated, his son stopped the mantel clock. You can still see the clock just as it was, including Grant’s deathbed, his writing chair, and a remarkably intact floral arrangement which arrived while he lay in state.

It’s one thing to see the image of Grant on the 50-dollar bill, or remember the name from history class, but it’s another to learn about the man, the flesh and blood human being, from his humble beginnings, to unbelievable brilliance on the battlefield; his compassion to his fellow citizen at Lee’s surrender at Appomattox, about his unfailing devotion to family and country, his rise to the presidency, and his valiant last days. After learning of Grant’s passing, social reformer and statesman, Frederick Douglass wrote, “In him the Negro found a protector, the Indian a friend, a vanquished foe a brother, an imperiled nation a savior.”

Thanks to Ron Chernow’s Grant, an extensively researched and highly-detailed account of one of our country’s unsung heroes, he tackles the never-ending stories of alcoholism which haunted Grant throughout his life and beyond. Reports have emerged, however, that many of these stories were instigated by enemies, or those wanting Lincoln to push him aside. Yes, Grant was probably an alcoholic, as Chernow, notes, but “alcohol was not a recreation selfishly indulged, but a forbidden impulse against which he struggled for most of his life.” This was, he writes, “A chronic disease, not a personal failure.” 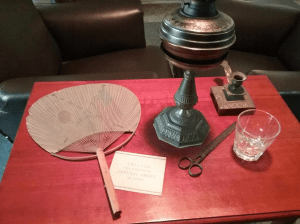 Born in the Midwest, Grant was raised by a virtuous mother, and a scheming, slave-owning father, who finagled a spot into West Point for his son. There, he showed himself to be an expert horseman, but a mediocre student, and eventually was sent south to participate in the Mexican-American War, and to outposts in the west. Married with children by this time, Grant left the army and pursued various business ventures that either failed or required an expertise he lacked. Disillusioned with civilian life, Grant requested a military position in the US Army after shots were fired at Fort Sumter.

This essay is not meant to chronicle Grant’s life, Lord knows there are plenty of biographies out there, but rather to shed light on the man himself, and how he used common sense, humanity, and pragmatism to win a war, and later run a country. When looking up at Mt. Rushmore, one wonders whether Grant should have been placed beside Lincoln as both were instrumental as presidents in keeping the Union together.

In addition to Grant’s Cottage, the General Grant National Memorial on Manhattan’s Upper West Side contains the remains of the former president and wife, Julia, surrounded by the marble busts of Union generals. A magnificent structure, the memorial rises 150 feet from a bluff overlooking the Hudson River. The short film provides a glimpse into his life, and visitors can see some period memorability of the time. It’s a quiet place, with Riverside Park buffering the sounds of West Side Highway traffic. After deliberating over the many offers for where to lay her husband, Julia chose Riverside Park because she knew it would be a place where all Americans could get to easily, and where she could be buried with him. 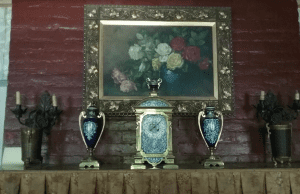 In the one-hundred and thirty-three years since his death, there’s a growing appreciation for Grant, a nod to the adage that only the passage of time can adequately shed the best light on the past. The Civil War is known for a lot of things: the carnage, the destruction of southern capitals, the Gettysburg Address, but consider how compassion Grant treated the south during and after Lee’s surrender. After the terms for ending the war were decided, and the two generals were parting Appomattox Courthouse, Chernow writes, “When Lee sat up straight in the saddle, Grant descended the front steps and lifted his hat in homage to his vanquished foe…,” a salute that inspired the other Union officers to do the same; the jubilation that ensued by the Union soldiers was delayed until Lee was out of sight.

One other aspect of his personality should be noted. In the last year of Grant’s life, a financial blunder left his family destitute. It was always “family first” With Grant and leaving his family in debt was unacceptable and so accepted an offer to write his memoir in hopes of garnering a small account for his widow and children. Grant, with advanced throat cancer, was living at the time on the east side of Manhattan and a local publisher was set to print the yet unwritten, memoir. Before the contracts were signed, however, Mark Twain, then just starting his own publishing company, met with Grant and sweetened the deal, promising that Julia, would not only be able to pay off debts, but live comfortably for the rest of her days. Grant signed the contract. That summer, the heat in NYC was so stifling, it was suggested Grant accept an offer to stay at McGregor’s Hotel in Wilton, NY, just south of Saratoga Springs which was a popular vacation spot. In a race against time, Grant worked four to six hours a day while suffering from such a painful cancer that he had a concoction of liquid cocaine sprayed into his throat.

Writing sometimes 10,000 words a day, a feat Twain envied, Grant completed the work, and died knowing that it was an instant bestseller with well over 350,000 sets sold before the book was even completed. When all was said and done, Julia and the family netted somewhere around $450,000 (valued today at about 12 million dollars). 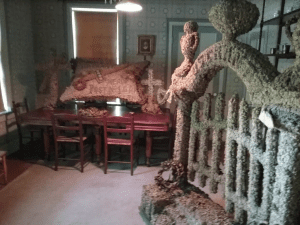 This month marks the 133rd anniversary of his death, and with any remembrance of past historical figures, there will be speeches, a wreath laying, and ceremonial bunting. Chernow cites a July, 1885 New York Times piece which speaks of Grant, “if a great soldier is indomitable in purpose and exhaustless in courage, endurance, and equanimity; if he is free from vanity and pettiness, if he is unpretentious, truthful, frank, constant, generous to friends, magnanimous to foes, and patriotic to the core, of him it will be said, ‘He is like Grant.’“