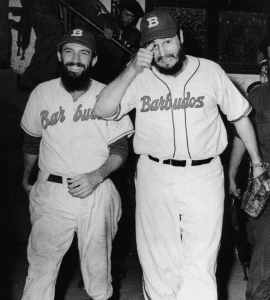 Baseball is our innocent pastime. Marked by stateliness and decorum, the game largely excludes the messiness and cruelty of the outside world. Saturday, July 25, 1959, was one of those rare occasions when history intruded on the grassy diamond. That evening, the simple game of pitching, hitting, and fielding became entangled with revolution, gunfire, and cold war politics.

The game took place in the sweltering atmosphere of Havana, Cuba. The Rochester Red Wings were playing the home team, known as the Sugar Kings. Along with the Syracuse Chiefs and Buffalo Bisons, Rochester was an upstate member of the triple-A International League, which included teams from Havana, Montreal and Toronto.

Like their North American neighbors, Cubans were devoted to the game. The Sugar Kings had played in the league since 1954, and there was talk of locating a Major League club in Havana.

But all was not well in the island nation. On July 26, 1953, an armed group of students had risen up against the corrupt dictatorship of Fulgencio Batista. Their unsuccessful raid on the Moncada military barracks in Santiago marked the beginning of a revolutionary movement that culminated in the overthrow of Batista on January 1, 1959. 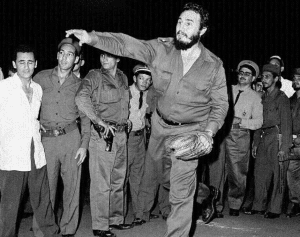 When the Rochester ball club arrived for a weekend road trip, they had the privilege of watching the leader of that revolution participate in a Friday evening exhibition. Fidel Castro was a baseball fanático, although his reputation as talented player was exaggerated. After practicing all day in his hotel room, he took the mound for his pick-up team, which was known as the Barbudos or “bearded ones.” He hurled two innings against a team of military policemen, his pitching described as “wild but fast.” When an opposing batter was called out on strikes, Castro rushed to the plate and shook hands with the umpire.

The next night’s action began with the conclusion of a game that had been cut short earlier in the season. El Cerro Stadium, twice the size of most minor-league ballparks, was packed with 35,000 enthusiastic fans. The Sugar Kings delighted their followers by driving in a run to win the suspended game.

The scheduled contest got under way late. The Rochester team looked like they would wrap it up with a win as they took a 3-1 lead into the final inning. But the Sugar Kings scored two runs in the bottom of the ninth, pushing the game into extra innings.

By that time, it was midnight. Perplexed Red Wing players watched the stadium lights suddenly go dark, a spotlight illuminate the Cuban flag, and everyone stand for the Cuban national anthem. It was the beginning of the celebration of July 26, now designated as Cuba’s Independence Day. Suddenly the stadium erupted in gunfire. Baseball fans pulled out handguns. Soldiers fired rifles. More volleys came from crowds outside the stadium. 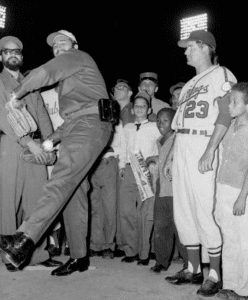 After a delay to let the celebratory fusillade settle down, play resumed. Red Wing infielder Billy Harrell smacked a homer in the top of the eleventh, and the sweating Wings again anticipated a victory, a shower, and a cold beer.

Not so fast. In the bottom of the inning, Sugar Kings catcher Jesse Gonder pounded a pitch down the left field line for a double. The Havana team included both local talent and U.S. players working their way through the farm system. Gonder, a prospect from Arkansas, would go on to a long major league career that included stints with both the Yankees and the Mets.

Red Wings manager Ellis “Cot” Deal rushed onto the field to argue that Gonder never touched first base. Facing a stadium of raucous and heavily armed hometown fans, the umpires were not about to change the call. Instead, they ejected Deal from the game. Gonder scored. On to the twelfth, tied 4 to 4.

Just as the Red Wings chalked up their last out in that frame, the excited fans let loose another burst of gunfire. The laws of physics intervened — bullets shot into the air returned to earth. One slug landed on the head of Red Wings third base coach Frank Verdi.

Normally a player, Verdi had been knocked silly by a beanball several weeks earlier. Taking a break from playing because of dizzy spells, he had also started wearing a protective liner under his hat (modern batting helmets were not yet mandated). The precaution may have saved him from serious injury. Ricocheting off his helmet and striking his shoulder, the bullet only knocked him down and left him dazed. At almost the same instant the Sugar Kings shortstop was struck on the shoulder by another bullet.

At that point, Verdi said, the bullets were coming down “like hailstones.” Players on both teams sprinted for the clubhouse. The game was suspended. Cuban baseball officials tried to convince the Red Wings to stay for a scheduled Sunday doubleheader, but the Rochester players had had enough. “We came here to play ball, not to be shot at,” Verdi told the Associated Press. The team took the next plane out.

After the Cubans issued an apology, International League teams resumed playing in Havana. The Sugar Kings went on to win the league championship that year, and prevailed in the Junior World Series over the Minneapolis Millers of the American Association. But the Red Wing game left a dark cloud over professional baseball in Cuba.

As the Havana team began its 1960 season, relations between the United States and Cuba were rapidly deteriorating. Castro nationalized the property of American corporations, and internal dissent erupted into violence. The political climate on the island became increasingly turbulent. In July, under pressure from the U.S. State Department, league officials abruptly moved the Sugar Kings to Jersey City, New Jersey, and renamed them – what else? – the Jerseys.

That October, President Eisenhower imposed an embargo on Cuba. The trade and travel restrictions were tightened two years later following the attempted U.S.-backed invasion of 1961 and the Cuban Missile Crisis the following year. The break in relations lasted half a century.

With the disappearance of U.S. ball teams, a shared interest between the Cuban and American people was lost. The intrusion of politics into the game also affected many excellent Cuban baseball players, who had to leave their homeland behind if they wanted to play in the Major Leagues. Among them was Leo Cárdenas, the player who had been struck by a spent round during the Red Wing game. One of the great fielders of his generation, Cárdenas was an all-star shortstop with Cincinnati Reds and other clubs.

It wasn’t until 2014 that the long freeze in Cuban-American relations began to thaw. When President Obama visited the island in 2016, he and his family took in a baseball exhibition between the Tampa Bay Rays and the Cuba National Team. The teams played in the same stadium where Rochester players had dodged falling bullets on a hot night in 1959 — two years before Obama was born.