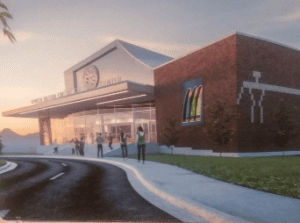 The Seneca Nation of Indians (Onon:dowa’ga:’) will open its new Seneca-Iroquois National Museum in Salamanca, NY on August 4, 2018 at 11 am.

The new 33,000 square-foot $18 million museum and cultural center will celebrate Seneca and Native history and also have a focus on the future.

What follows is an announcement that was sent to the press.

The new museum and cultural center has been millennia in the making. The Seneca hold a unique place in North American and world history. Known as “The Keepers of the Western Door” for being the western-most among the six nations of the Iroquois Confederacy, the Seneca are a matriarchal society that has participated in what is accepted as the first modern democracy in the Western hemisphere since 1100 A.D.

The Iroquois, or Haudenosaunee, still regularly convene to make major decisions, voting democratically on issues that impact all Native members. Further, the Seneca never surrendered, instead reaching treaties with European settlers, including the new United States of America in 1784.

The fact that the Seneca still thrive on their ancient homelands is crucial. Yet many sacred lands have been taken by the United States, even as recently as the 1960s to build the Kinzua Dam in northwestern Pennsylvania. Therefore, the new museum and cultural center are both a celebration of the past and a cornerstone for the future of the Seneca and all Americans.

The 33,000 square-foot building has hundreds of items on display that will be regularly updated. 600 people can pack the new auditorium for educational programs, including Native lectures, cultural presentations, plays for children, even concerts. The gift shop has been expanded, and now offers online ordering of exclusive Native-made and -inspired art and other keepsakes.

The Longhouse beside the museum is the first Seneca Longhouse raised since 1820 – huge wooden structures that served as homes and gathering places for centuries – becoming targets for invaders and settlers trying to remove Seneca from their sacred lands. The raising of this Longhouse is both symbolic and functional, offering a large outdoor space for educational, cultural, and entertainment events.

While thousands of Natives and non-Natives regularly attend the annual Seneca Pow-Wow and Heritage Days, such events will become more frequent and accessible to local schools, tourists, as well as the tens of thousands of gamers at Seneca Casinos in Salamanca and Niagara Falls. 95% of Seneca artifacts have never been displayed due to their fragile nature, and a state of the art 3-D printing lab will allow delicate, irreplaceable, items to be scanned and duplicated for further study. To properly document and display these rare relics, the Seneca-Iroquois National Museum has hired a professional archivist.

Given ongoing environmental concerns across America where Natives have taken the lead – Kinzua Dam, the Dakota Access Pipeline and Standing Rock Sioux, the future of The Great Lakes, and new pollutants from fracking waste now threatening the Allegheny River, the Seneca’s sacred “Beautiful Waters” – education and engagement have never been so important.

Drone footage shot by students of the new museum can be found here.