Patent. Important in it own right, this dispute and its eventual resolution sheds light on the politics of land acquisitions from Native Americans in the colonial period.

In 1708, Lord Cornbury, Governor of the Colony of New York, issued a land patent of several hundred thousand acres of lands called Kayaderosseras to thirteen influential men of the colony. The Patent was vast, containing upwards of 800,000 acres, and encompassed the major part of what is today Saratoga County as well as parcels in Warren, Montgomery and Fulton Counties.

This grant was loosely based on a deed the proprietors had received from the Mohawk in 1704. While the exact location of this land, is difficult to discern from the deed, it seems consistent with later Native American claims that the parcel sold was for “three small farms.” The scale of the boundaries is telling. In 1704 the only distance mentioned was “down along the [Mohawk] river one mile, more or less.”

Four years later when the Patent was issued, the distances multiplied to five miles by fourteen miles by eight miles by twenty! This discrepancy, along with who among the Mohawks actually agreed to the sale, would come back to haunt the heirs of the purchasers over the next sixty years. 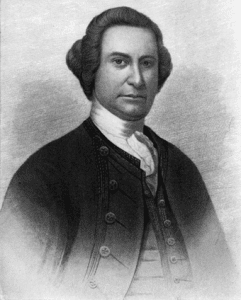 How this dispute was finally settled owes much to the influence of Sir William Johnson, the son of Irish Catholic parents who emigrated to New York in 1738. He became Indian Commissioner to the Iroquois in 1746 but resigned in 1751 after a dispute over payment for his expenses incurred during his tenure. He was reinstated in 1755 when the Six Nations demanded it as a prerequisite for their participation in the looming French and Indian War. His reinstatement was mutually beneficial. The Iroquois sought Johnson’s help in restoring their waning influence among tribes in the Northeast and Ohio valley. Johnson needed them to insure his own dominance of the Indian trade and peaceful settlement of the Mohawk Valley, which he oversaw from his estate at Fort Johnson.

This history helps us understand Johnson’s strong support of the Mohawk claim that the Kayaderosseras Patent was a fraudulent land grab by members of New York’s colonial elite at the expense of the Native Americans. Johnson’s efforts, and the final solution to the dispute are well documented in the Sir William Johnson Papers and the Documents Relative to the Colonial History of New York (1853).

At a conference at Fort Johnson in 1760, Little Abraham renewed the complaints of the Mohawk tribe. Lamenting that “we are a poor people, having no land we can call our own,” he challenged Johnson to take up their cause.  Johnson promised to help them, but in his reply, there is a sense that he is not convinced that he can do much, offering that, “I will make the best enquiry I can into the true state of your complaint and when I am master of it will transmit it to England.” That path had been traversed before, but dutiful to his commitment, Johnson raised the issue to the British Board of Trade in several letters over the coming years.

In a long letter to them written in 1763, he laid out the specific disputes regarding the patent: That the original sale was for a small piece of land (about enough for three farms); that the purchase money was never paid; that the ensuing patent of 800,000 acres included the most valuable part of the Mohawk hunting grounds; and that no survey or settlement has been attempted in fifty-five years.

Apparently, nothing ever came of his inquiries and over the years Johnson became more than a little frustrated with the lack of redress for the claims of the Mohawks. Often finding himself taking the side of the Iroquois against the landed interests of the colony, he took it personally that he had been unable to resolve their complaints concerning the disposition of the Kayaderosseras lands.

However, pressure was mounting to resolve the issue. As the demand for settlement of the  Kayaderosseras Patent increased following the French and Indian War, so did the value of the shares of the proprietors. The current owners were clearly anxious to cash in on this suddenly lucrative asset. In the mid 1760s they began discretely settling a few families on patent land in the vicinity of Fort Edward and Saratoga Lake. Advertisements began to appear in newspapers offering the land for sale despite the lack of clear ownership by the proprietors.

Early in 1767, Johnson met with John Beekman, a representative of the proprietors, to once again lay out the issues that had been repeatedly raised by the Mohawk and their allies over the past fifteen years. At a March meeting, a group of these proprietors offered a settlement to release the western portion of their claim to its original owners. Their proposal stated their willingness to give up their rights west of a line from the North Chuctenuda Creek, near present day Amsterdam, to the northwesternmost head of the Kayaderosseras. Sir William presented this offer to a gathering of the Mohawks, but because their leaders were absent no response was received until the following year.

The year 1768 proved to be pivotal. Sixty years after the patent was issued everything came together over just four-months. Ironically, it was the proprietors who took the lead after ignoring the pleas of the Mohawk, William Johnson, and a host of colonial governors for years. In March they gave Peter Remsen, a New York City merchant, power of attorney to settle all disputes concerning the Kayaderosseras. In May 1768 Governor Henry Moore was able to report that representatives of the proprietors had given him “Carte Blanch to settle this dispute with the Indians on such terms as I shall think proper.”

The stage was set for a settlement, but there proved to be one more hurdle to overcome. In June a congress was held in Johnson Hall, orchestrated by Guy Johnson standing in for his uncle William, who was in Connecticut hoping to improve his failing health at the seashore. Governor Moore was accompanied by several prominent men of the colony, including Philip Schuyler, the newly elected member of the Assembly and future Revolutionary War general. Representing the proprietors were Remsen and John McCrea, a lawyer who had settled in the Northumberland section of the Patent in 1763, and the brother of Jane McCrea who would be famously killed during the campaign leading to the battles near Saratoga in 1777.

After days of restating positions long held by both sides, they concluded an agreement that the Patent as claimed by the proprietors should be reduced, with a major section of the western portion returned to native people. This was the approach promoted by the patentees since at least 1765. The sticking point became the line of partition, specifically the location at which the boundary crossed Kayaderosseras Creek.

Abraham, speaking on behalf of the Iroquois, insisted the line from the Mohawk River to the falls above Fort Edward pivot at the head of the nearest branch of the Kayaderosseras, while the proprietors held fast to their initial position that this point be at the northernmost head of the Creek. The different points meant that many thousands of acres remained under dispute. To make matters worse, no one seemed to be able to fix either position on their maps.

This uncertainty provided an opening for Governor Moore to seize the initiative. Stating that the maps were defective and that these different points could not be fixed with any certainty, he proposed that a survey be conducted to determine the true locations. Both sides agreed to this plan and Christopher Yates was given the task of doing the survey, accompanied by several Mohawk.

While previous efforts to reach a settlement seemed to drag on year after year, not so now. By July the survey had been completed and the proprietors were anxious to return to the table. A committee of thirteen of them gave Remsen and Isaac Low, another New York City merchant, “full powers to strike a bargain with the Indians.” This group of thirteen included three men − Dirck Lefferts, Cornelius Clopper and Benjamin Kissam, the group’s lawyer − destined to play an important role in the settlement of the Kayaderosseras patent in future years. They, along with Isaac Low, later became the Trustees responsible for administering the sale of the land once it was partitioned.

In early August 1768, the conference reconvened at Johnson Hall. Remsen, referring to the recently completed survey, pointed out that the northern head of the Creek appeared less favorable to the patentees as it was not as far northwest as they had anticipated. Nevertheless, they proposed setting the line at that point as now clarified on the map. After deliberations among the Native American attendees, Abraham agreed to the proposal.

The only matter left to decide was the purchase price. The proprietors had a price in mind, but rather than offer it, they asked William Johnson to propose the amount. By making Johnson the final arbiter of the sale price, they hoped to avoid any further disputes that could delay the partition and settlement. Johnson, whose impartiality was accepted by both sides, came back the next day with the price – $5,000. This was more than the proprietors expected to pay. They had come to the conference with $2,000.

Nonetheless they were not going to let the issue of cost get in the way of a final settlement. Isaac Low indicated their acceptance of Johnson’s recommendation in a final address to the conference attendees: “Although the sum of money which is proposed to be given to you, be larger than we expected, we readily agree to it, and shall honestly pay you without delay.”

It was done. To cover the remaining $3,000 of the purchase price, the representatives of the Proprietors − Low, Remsen and McCrea − signed a note and passed it to Johnson as security. Mission accomplished. The next steps were already underway to survey and partition these 406,000 acres into lots to be sold or leased. Seven years later, at the outbreak of the American Revolution, farms and small settlements were already sprouting throughout the patent.