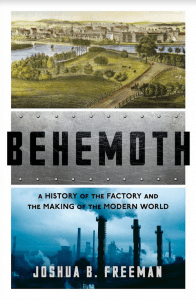 Freeman will speak on his new book Behemoth: A History of the Factory and the Making of the Modern World.

In addition to Behemoth, Josh is the author of American Empire, 1945-2000: The Rise of a Global Power; The Democratic Revolution at Home; Working-Class New York: Life and Labor since World War II; and In Transit: The Transport Workers Union in New York City, 1933-1966.

Freeman has written extensively about the history of industry, labor, modern America, and New York City and has appeared in many television documentaries, including Ric Burns’ New York. He has written for The New York Times, The Washington Post, Newsday, Time, and The Nation. He divides his time between Copake Falls and New York City.

Tickets for the event, including a barbecue supper prepared by pitmaster Ken Preusser, are $15 and available online or by phone at (518) 329-3251.

Friends of Taconic State Park was established in 2008 to support cultural, recreational and educational activities within the park with the preservation of the Copake Iron Works National Heritage Area Site its priority. The group is implementing a 20-year plan to create a pre-eminent site of historic iron-making and a national destination for tourists in Copake Falls. The new Copake Iron Works Visitor Center features a video documentary chronicling the history of the site and an extensively interpreted trail from the Copake Iron Works to the Bash Bish Falls, for which trail maps are available.

For more information call (518) 966-2730. To learn more about Friends of Taconic State Park, visit their website or email info@friendsoftsp.org.