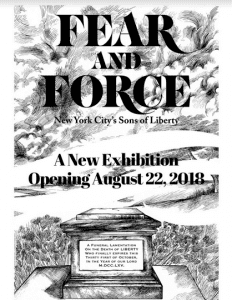 On display in the Museum’s largest gallery, the exhibition will immerse visitors in New York City in the late 18th century, when the Sons of Liberty first began to make a name for themselves as an organized group who opposed British rule through violent resistance prior to the outbreak of the American Revolution.

The exhibition will take visitors through a timeline that chronicles key players and stories behind some of the most dramatic events that ignited the spark of revolution in the 13 colonies, including New York’s “tea party,” and the tarring and feathering of Loyalists.

Objects preserved from pivotal moments relating to the New York Sons of Liberty will be on display, such as an iron fence fragment from the tearing down of the King George III statue in Bowling Green Park, and weapons like those used in New York City’s 1769 Battle of Golden Hill. Visitors will even have the chance to have their own “tea party” through an interactive, sensory exploration involving real crates of imported colonial tea.

Fear & Force: New York City’s Sons of will be on view in the Museum’s Mesick Gallery through August, 2020.