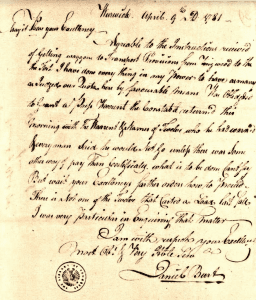 Sometimes the past changes. For the Friends of Hathorn House research team, a chance remark led to discovery of a lost chapter in Warwick’s history — the Continental Army’s supply depot here.

In 1780-81, the Army kept a large and active post near the Village of Warwick, NY which stored and shipped supplies to the troops. The depot was not without controversy, however. The citizens of Warwick proved to be challenging partners.

In late May, Mark Hendrickson, co-author of So Many Brave Men: A History of the Battle of Minisink Ford mentioned a source of records relating to the Warwick Depot. The group’s response was “What Warwick supply depot?!” There had been fragmentary evidence that some supplies were stored here, but no details. Nothing in the written record or memory of the community made mention of this. A detailed listing of the records of Commissary General Charles Stewart was consulted and interest rocketed. A research trip to the Fenimore Art Museum’s research library in Cooperstown yielded pure gold – dozens of letters containing astonishing detail. These records would never have been uncovered without Hendrickson’s tip-off — proving again the old adage of Revolutionary days that it is only by cooperation that the people can achieve success.

One visit of George Washington to Warwick had been documented long ago (“Grog at Warwick”, July 1782), but the cherished tradition of Martha Washington staying at Baird’s Tavern remained elusive. Benjamin Sayer, an owner of the tavern, noted that she was there in the fall of 1780, but no documents had ever been uncovered. She may have indeed been here then, but here’s what Continental Army official Aaron Norcross, writing at Warwick, had to say on June 23, 1781:

“We are in hopes to have Those Things Mentioned in your Letter ready against Monday. Nothing will be wanting on our parts in Procuring So as to make it as agreeable to Lady Washington as in our Power.”

His colleague and the Army’s Commissary, Robert Nesbitt, was laying ill, but recovered enough to write on June 26, 1781:  “Mrs. Washington had what was in our power to procure…”

Martha had also been unwell; on June 9 Nesbitt mentioned that Mrs. Washington was ailing, possibly on her way at Ringwood with the Erskines. We can assume that she stayed at Baird’s while here since it was the largest and likely best equipped tavern in the area — but also because other letters of Nesbitt indicate that is where the officers are lodging. Her visit appears to have taken place on Monday, June 25 th, leaving the next day.

The depot at Warwick seems to have been established in early 1780, judging by a letter of Washington to William Heath on Nov. 27, 1779, approving the location of Warwick as convenient to the needs of the army. The letters of Commissary Nesbitt from Warwick begin in July of 1780.

One of the most astonishing things was the sheer volume of materials being stored and moved. For the most part, they were routed through Ringwood or Sussex to Warwick then on to other posts such as New Windsor as needed.  We’re not talking a couple dozen barrels. Timothy Pickering notes in a letter to Washington on May 12, 1781 that  “the quantity of flour…. added to the 209 barrels mentioned by Capt. Mitchell, will make about four hundred barrels now at Warwick.”

Four hundred barrels? Let’s try to understand that. A “barrel” was a standard unit of measurement, about 32 gallons in capacity. Each gallon of flour weighed about 5 pounds. So each “barrel” of flour would be 160 pounds, plus the substantial weight of the wooden barrel. Each in size a bit smaller and about as heavy as today’s 50 gallon steel drums. Let’s say maybe they weighed 8 pounds each, empty. Four hundred of them filled would be well over 33 tons. And that’s just the flour alone, at this particular time. This would take major effort and space to move and store.

Warwick didn’t have many large buildings. A number of Nesbitt’s letters are complaints that the supplies have to be stored outside, where the flour and any other dry goods are in danger of getting ruined. One can assume the supplies also needed to be stored close to each other to avoid pilfering and have enough men to guard them.

“Squire” Burt, meaning Capt. James Burt whose house still stands on Rt. 17A, is mentioned in the letters as being involved with storage; actually, the officers are complaining about the flour being outside and blaming him. Since Burt’s farm was close to one of the largest buildings of the time, it seems logical though shocking that the Baptist Meeting House was eventually commandeered. One letter states that the meeting house – the original one that stood at the intersection of what is today Forester Ave. and Rt. 17A – is entirely full. We can assume the Baptists, some of whom had mixed feelings about the war to begin with, were not pleased.

This volume and weight of supplies could only be carried one way, by ox cart. Horses weren’t strong enough. The Continental Army had to resort to contracting with locals for various stages of the journey for supplies. The only way they could pay for those services was with promissory notes. They didn’t actually have any money. There is ample evidence in the letters that even the most ardent Whigs of Warwick became… obstinate. No pay, no ox carts. Numerous letters, including one from Daniel Burt to Washington, indicate a log-jam of supplies at Warwick due to lack of ox teams and carts to forward them elsewhere. In July of 1781 Nesbitt bitterly complains:

“I never will depend upon the promises of the Warwickshire lads or those in this Neighborhood, until their receipts are signed, the public good does not trouble them much… Many of the barrels of flour lye out of Doors, a guard will be really necessary, to get one here is impossible. Coll. Hathorn told Mr. Norcross he would furnish a Guard if H[eadquarters?] would pay them…”

Nesbitt considered this unpatriotic. But one must understand that most of Warwick’s families were trying to hang on amidst extreme financial hardship, lack of supplies, and food. There was no way to know when the war would end or who would win it. It is not surprising that when push came to shove, they dug in their heels for survival.

As we can see from the documents uncovered by Hendrickson, Warwick had a different kind of patriotic fireworks going on long ago; Continentals and locals struggled to find ways to keep moving forward as the war continued relentlessly on.

This is only part of the story that these letters tell. The handwritten letters are being transcribed by Friends of Hathorn House volunteers this summer and will hopefully be available in their entirety by the fall.

For more information or to get updates about these documents, email hathornhouse@gmail.com.