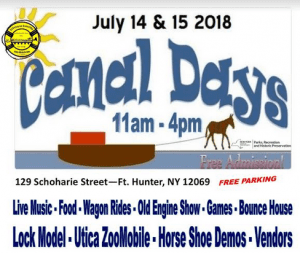 Schoharie Crossing is set to host the annual Canal Days Festival on July 14-15 from 11 am to 4 pm. This event is a free community festival celebrating the Erie Canal and the character of the people and towns along the way. This event is part of the continuing celebration of the Erie Canal Bicentennial. The Erie Canal was started in 1817 and completed in 1825.

This year’s festival will feature a participatory balloon art installation by Airigami. This company has been creating unique art displays which have been showcased around the world. As part of the Canal Days festivities, they will be supervising the creation of a large Erie Canal packet boat mural out of environmentally friendly balloons.

Canal Days will offer a variety of other attractions including wagon rides, the Utica Zoomobile, horse shoeing demonstrations, Tri County Old Time Engine display, games, food vendors, Down By the River Kayak demos, a Canalway trail guided bicycle ride with the Adirondack Velo Club on Saturday at 1 pm, and The Dudley Observatory will have a solar telescope to safely view the sun on Sunday. Various community organizations will be participating including the Montgomery Sheriff’s Department, the Mohawk River Basin Program, Capital Mohawk PRISM and the New York State Archeology Association. Sean The Prankster will perform magic at 1:30 pm on both Saturday and Sunday. The New York State Canal Corporation will bring their popular working model of an Erie Canal lock as well as an actual Erie Canal tug boat.

On Saturday, the modern country band, Tompkins Drive will have two performances. In addition, The Friends of Schoharie Crossing will host a chicken barbeque. Also on Saturday will be the official opening of the 2018 art show which features paintings inspired by recreation among the built and natural environments at Schoharie Crossing.

On Sunday, the program will feature the music of the Jump Daddies swing band. There will also be a Rat Pack Cruzers Car show with prizes for best of show.

For more information about Schoharie Crossing State Historic Site and our events, call the Visitor Center at (518) 829-7516, or email SchoharieCrossing@parks.ny.gov.