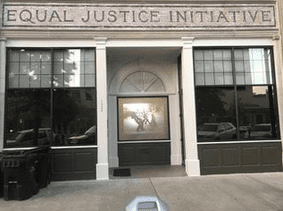 After the morning Gathering at 10 am Saturday, August 4, 2018 for the 9th Annual Peterboro Emancipation Day at the Gerrit Smith Estate National Historic Landmark in Peterboro, the annual processional will carry two wreaths to the cemetery to lay on the graves of persons “Born a Slave, Died a Free Woman.”

At 2 pm Jacob Donovan-Colin will present The Evolution of Slavery and the Heroes Who Fight It: Discussions of My Travels from Peterboro and the Home of Gerrit Smith to Montgomery AL and the Home of the Equal Justice Initiative. Colin will share images and purposes of his April trip to volunteer at the opening of the National Memorial for Peace and Justice at the Equal Justice Initiative (EJI). He will discuss the importance of the history of Gerrit Smith and why it is relevant today, why people should still care about that history, and what it means today.

The National Memorial for Peace and Justice, which opened to the public on April 26, 2018, is the nation’s first memorial dedicated to the legacy of enslaved black people terrorized by lynching, African Americans humiliated by racial segregation and Jim Crow, and people of color burdened with contemporary presumptions of guilt and police violence. Work on the memorial began in 2010 when EJI staff began investigating thousands of racial terror lynchings in the American South, many of which had never been documented. EJI was interested not only in lynching incidents, but in understanding the terror and trauma this sanctioned violence against the black community created.

Six million black people fled the South as refugees and exiles as a result of these “racial terror lynchings.” This research ultimately produced Lynching in America: Confronting the Legacy of Racial Terror in 2015 which documented thousands of racial terror lynchings in twelve states. Since the report’s release, EJI has supplemented its original research by documenting racial terror lynchings in states outside the Deep South. EJI staff has also embarked on a project to memorialize this history by visiting hundreds of lynching sites, collecting soil, and erecting public markers, in an effort to reshape the cultural landscape with monuments and memorials that more truthfully and accurately reflect our history.

The Memorial for Peace and Justice was conceived with the hope of creating a sober, meaningful site where people can gather and reflect on America’s history of racial inequality. EJI partnered with artists like Kwame Akoto-Bamfo whose sculpture on slavery confronts visitors when they first enter the memorial. EJI then leads visitors on a journey from slavery, through lynching and racial terror, with text, narrative, and monuments to the lynching victims in America. In the center of the site, visitors will encounter a memorial square, created with assistance from the Mass Design Group. The memorial experience continues through the civil rights era made visible with a sculpture by Dana King dedicated to the women who sustained the Montgomery Bus Boycott.

Finally, the memorial journey ends with contemporary issues of police violence and racially biased criminal justice expressed in a final work created by Hank Willis Thomas. The memorial displays writing from Toni Morrison, words from Dr. Martin Luther King Jr., and a reflection space in honor of Ida B. Wells.

Set on a six-acre site, the memorial uses sculpture, art, and design to contextualize racial terror. The site includes a memorial square with 800 six-foot monuments to symbolize thousands of racial terror lynching victims in the United States and the counties and states where this terrorism took place.

Jacob spent the majority of his childhood living and playing in Peterboro. After graduating from Morrisville High School he enlisted in the U.S. Navy to travel and see the world. Upon completion of his service he returned to upstate NY and eventually bought the home in Peterboro in which he grew up. A graduate of Morrisville State College and Cornell University, Jake is currently working on an advanced degree from Syracuse University where he also works as a Steam Plant Operations Supervisor. He is passionate about the local history and being involved in his community. He currently sits on the Smithfield Community Association and Smithfield Planning boards. Along with being an available docent for Gerrit Smith tours Jacob works to promote awareness of the history of Gerrit Smith and the Gerrit Smith Estate. Jacob’s other passions include coaching his son’s sports teams, being involved with the local youth commission and spending time with friends and family.