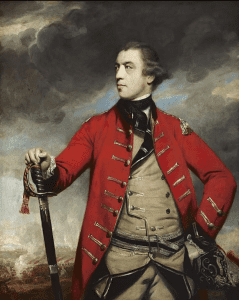 Terrorism has been a grim feature of our time, but the tactic is far from new. The Revolutionary War, like every war, was marked by wanton violence. One of the cruelest incidents came in October 1777 when the British attacked the city of Kingston, then the capital of New York State.

A massive enemy invasion in 1776 had driven patriot forces from New York City. The delegates who were in the process of writing a state constitution moved away from the fighting, first to White Plains, then to Fishkill.

With the constitution ratified by April 1777, the first state legislature met in Kingston, a venerable Hudson Valley town where a majority of the population still spoke Dutch. Country lawyer George Clinton was sworn in as the state’s first governor on July 30.

By that time, an invasion led by British general John Burgoyne had forced the Americans from Fort Ticonderoga on Lake Champlain. The redcoats and their German allies were moving south toward Albany with the goal of gaining control of the Champlain-Hudson corridor and splitting the colonies. Patriot militiamen worked feverishly to impede the British advance.

As the legislators were creating the structures of a state government, they warily tracked the movements of the enemy. Late in the summer, the danger appeared to diminish. The British suffered a sharp defeat just inside the New York border near Bennington, Vermont. Burgoyne’s progress slowed. The British commander in New York City, General William Howe, left to attack Philadelphia. He told his subordinate, Sir Henry Clinton, to sail north and help Burgoyne if possible. The cautious Clinton at first did nothing.

Howe sent Congress scurrying away, outmaneuvered George Washington, and captured the American capital on September 26. A week earlier, Burgoyne’s invading army had been fought to a standstill at Saratoga, a fight known as the Battle of Freeman’s Farm. Burgoyne dug in to await either relief from the south or a diversion to draw away some of the American forces opposing him.

In early October, Henry Clinton finally sailed up the river to aid Burgoyne’s stalled force. He tricked the American commander, Israel Putnam, into thinking he would attack the eastern shore of the Hudson. Then he captured two American forts on the west bank, near the site of today’s Bear Mountain Bridge. The British force continued northward, capturing Fort Constitution opposite West Point. By October 13, the entire river was defenseless.

Governor George Clinton, who at thirty-eight was also a militia leader, retreated northward after the fall of the American forts. In the process, his men took a British courier prisoner. The man was carrying a silver bullet, which he promptly swallowed. Clinton ordered him to be given an emetic — he vomited up the bullet. Inside was a message from Henry Clinton to Burgoyne stating that help was on the way.

Neither the messenger nor his captors knew that the effort was already in vain. On October 7, Burgoyne had made a desperate attempt at an end-run around the American forces in his path. The furious Battle of Bemis Heights ended in a resounding British defeat. Burgoyne retreated northward with heavy losses.

The British invasion from the south continued. Henry Clinton returned to New York City, leaving his subordinate General John Vaughan to proceed up the river with a fleet of thirty warships and 1,600 soldiers.

Governor Clinton, with a thousand militiamen and several cannon, was hurrying along inland roads, trying to keep pace with the British flotilla so he could oppose a landing. He sent orders ahead that “every man that can fire a Gun should be immediately embodied.” General Putnam led another force up the east bank of the river.

On the morning of October 16, the British ships opened fire on American defenders along the shore. The patriots shot back from what is now Kingston Point, but could only mount a token resistance before retreating.

General Vaughan, operating behind enemy lines, was nervous. He ordered his men to climb toward the village, which stood on high ground three miles inland. On the way, they encountered a Tory who told Vaughan of Burgoyne’s defeat at Saratoga. If it was true, it meant that the mission of creating a diversion to aid the northern force had evaporated. But without official word, Vaughan could not be sure of the intelligence.

Angry and frustrated, the British commander ordered his men to burn the entire village of Kingston. The soldiers rushed through the town, torching one building after another. “In a very short time,” a patriot newspaper reported, “that pleasant and wealthy town was reduced to ashes.” 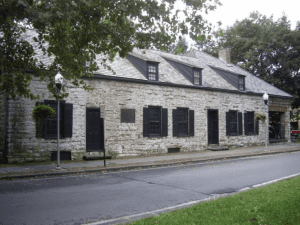 Kingston was a prosperous place, with many structures built of stone. They included stores, taverns and a prominent academy of higher learning. All were set aflame, along with residences and barns, the town church and the courthouse. The troops blew up some stored gunpowder. They looted what goods they could carry. Three hours after coming ashore, they were back on their ships. Four thousand civilians were left homeless.

Vaughan would claim that his rampage had been touched off by patriots firing on his men from the houses. The story is unlikely — the town was largely deserted before the enemy arrived, and Governor Clinton’s force had not reached Kingston in time. The British general more likely acted out of resentment and contempt for the upstart colonists. He had labeled Kingston a “nursery for almost every Villain in the Country.” His motive was clear: to punish and terrorize the rebels.

The British weren’t done. They sailed ten miles north to land on the opposite bank of the river. Vaughan put his men ashore at the estate of wealthy grandee Robert Livingston. He burned the family mansion and twenty-four other buildings to chastise the Livingstons, who had sided with the patriots. The British then held their position, waiting for word from the north. 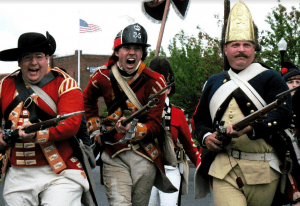 By October 23, Vaughan knew for certain that the worst had happened — six days earlier Burgoyne had surrendered his entire army to American General Horatio Gates, a defeat that would go down as a crucial turning point of the Revolutionary War.

As the British descended the river, Putnam’s men took pot shots at their ships from the shore, discouraging the enemy from landing to do more damage. Vaughan destroyed the two American forts that had been captured earlier. He returned to New York City.

The British made no gains in the Hudson Valley that summer, but the Americans took note of their vulnerabilities. They shifted their defenses farther north to West Point, which became the key patriot bastion on the river.

Deprived of shelter and food stores, the inhabitants of Kingston suffered through the winter of 1777-78. Most of the stone structures, although gutted, were eventually rebuilt — many are still standing today. Appeals brought aid for the town’s civilians from as far away as South Carolina. New York legislators reconvened in Poughkeepsie, twenty miles to the south. Albany became the permanent state capital in 1797.

George Washington wrote Governor Clinton that the British “maxim seems to be, to destroy where they cannot conquer.” The enemy attack on Kingston, he declared, “would do dishonour to the Arms of Barbarians.” General Gates wrote to Vaughan to ask, “Is it thus your King’s General thinks to make Converts to the Royal Cause?”

He was pointing out a fact that often seems to elude those who resort to terror. The tactic often backfires, instilling in its victims anger and determination rather than fear and timidity. Terrorism rarely works.

History buffs can retrace these events at a number of historic sites:

–The remains of Fort Montgomery, which was captured by the British in 1777, are just north of Bear Mountain Bridge. The site includes a visitor center and museum.

-Tours are available at West Point, now home to the U.S. Military Academy.

-The Kingston Stockade District includes many of the eighteenth-century buildings that survived the attack. The Senate House there is where the New York Senate met in 1777. A museum stands nearby.

-Saratoga National Historical Park is one of the best-preserved battlefields of the Revolutionary era.

-In October 2019, enthusiasts in full costume will reenact the Burning of Kingston, a biennial memorial event.