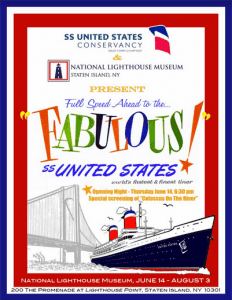 The National Lighthouse Museum, in partnership with the New York Chapter of the SS United States Conservancy, has announced a new exhibit “Full Speed Ahead to the Fabulous! SS United States.” This exhibit, on display at the National Lighthouse Museum from June 14th to August 3rd, celebrates the career of the luxury liner known as “America’s Flagship.”

The exhibition’s grand opening will take place on Thursday, June 14th at 6:30 pm and will be followed by a screening of the recently discovered short film Colossus on the River (1965; Run time approx. 15 min).

This show will trace the life of the ship, from young speed queen and popular cover girl to aging star of yesteryear and nearly forgotten “has-been,” and finally — with your help — to one of the great comeback stories in U.S. history.

Admission is $10, all proceeds go to support the National Lighthouse Museum and the SS United States Conservancy.

For more information or to make reservations, email Info@lighthousemuseum.org, call (718) 390-0040, or click here.