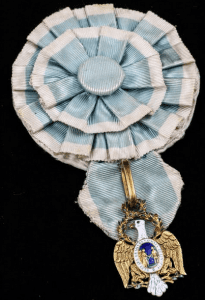 Fort Ticonderoga has announced the public display of a rare object from the time of the nation’s founding – an original Society of the Cincinnati gold eagle medal.

The priceless Revolutionary War medal is one of two surviving examples produced in Paris in 1783 for purchase by officers of the Continental Army. The medal, which is believed to have never been viewed publicly, is on loan to Fort Ticonderoga from the Robert Nittolo Collection, a large and important private collection of 18th-century North American militaria in.

The Society of the Cincinnati was founded by officers of the Continental Army in 1783. To signify membership in this exclusive organization, medals were commissioned by Pierre Charles L’Enfant (who is best known as the designer of the street plan of Washington D.C.) This medal is one of 140 made by the Jewelers Duval and Francastel in Paris, to be sold to members of the society when L’Enfant returned to America in 1784.

This particular medal was owned by Captain Richard Douglass from New London, Connecticut. He was one of the Connecticut men that marched to Massachusetts upon learning of the engagements at Lexington and Concord in 1775. Douglass was one of the few soldiers to serve in the Continental Army for the duration of the war. He saw action in a number of battles and witnessed the British surrender at Yorktown before returning home in 1784.

Captain Douglass was an original member of the Society along with other notable patriots including George Washington, Alexander Hamilton, and Society founder Henry Knox – who has a direct tie to Fort Ticonderoga. Knox traveled to the fort in the winter of 1775 to retrieve seized British artillery and transport them to Boston. His actions helped end the siege of the city in early 1776.

Public viewing begins on July 4 to coincide with the start of Independence Day celebrations.

The Society of the Cincinnati is the nation’s oldest patriotic organization and remains active to this day. For more information click here.