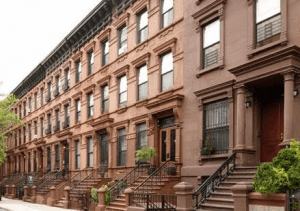 The Central Harlem – West 130-132nd Streets Historic District is located on the mid-blocks of West 130th, West 131st, and West 132nd streets, between Lenox and Seventh avenues. It consists of approximately 164 properties primarily row houses with a handful of apartment and institutional buildings.

During the Harlem Renaissance and through the 1960s, many of the district’s small, primarily residential buildings were adapted to house a variety of cultural, religious, civic, and political activities that sustained the community, fostered social justice and contributed to the incredible cultural significance of the district. Notable buildings include The New Amsterdam Musical Association (NAMA) headquarters, the oldest African-American musical association in the United States; the home of Scott Joplin, dubbed the “King of Ragtime;” the Friendship Baptist Church, actively involved in the fight for civil rights; the Utopia Neighborhood Club, an African American women’s social club that provided children’s health and educational services; and the National Headquarters for the March on Washington for Jobs and Freedom, instrumental in spurring the passage of the Civil Rights Act of 1964 and the Voting Rights Act of 1965.