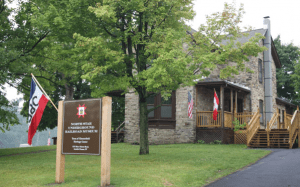 New this year, photo albums will help passengers follow the narrative, new information has been added on the Episcopal and Wesleyan Churches, and passengers can hear the recently discovered story of a man who escaped from Baltimore, Maryland, and reached Canada via Albany, Saratoga, Warren, Essex and Clinton Counties.

Guided tours on an air-conditioned 12 passenger mini-bus will be offered on the first and third Saturday every month until Columbus Day. These tours are an opportunity to learn about the North Country’s links to the National Underground Railroad. Passengers hear about heroes and heroines, pastors and publishers, and conflicts in churches. As well as visit a root cellar that was a hiding place.

The Champlain Line of the Underground Railroad was a network of individuals who helped hundreds of self-emancipated African Americans escape to freedom before the Civil War. Most found refuge in Canada, but some risked staying in the North County.

For more information about the North Star Underground Railroad Museum, visit their website.