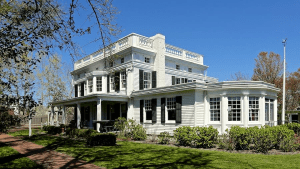 We caught the 7 am ferry from New London CT to Orient Point for a day on eastern Long Island (which was part of Connecticut for most of the 17th-century and was economically and cultural connected into the 19th).

Our destination was the Southampton Historical Museum’s 9th annual “Tour of Southampton Homes.” You know – “the Hamptons” – a famous haunt of the 1/10th of 1%.

So how does the work of local history perform in a place like that? The House Tour was awesome and what you might expect – folks with flashy estates opening up their houses to voyeurs like us – at $100pp – a chance to see inside the lifestyle of the astonishingly provisioned.

I loved it that day-of-sale tickets were being sold at the historical society’s ca. 1690 Thomas Halsey Homested and that the end-of-tour champagne reception was at their Rogers Mansion headquarters museum. Not surprisingly this is a popular event featuring seven sites to explore. The sites were busy throughout the afternoon, from 1 to 4 pm. The museum probably grossed $50k+ on the event, including registration fees and sponsorships – which is great.

I loved that they included the 1870 St. Andrew’s Dune Churchas part of the tour – with its eleven Tiffany windows – a space saturated with history, including a plaque honoring those who “served their country in the War for Independence; or who submitted to exile in 1779 rather than renounce their allegiance under the order of Governor Tryon, or who sustained at home ….the quartering of British Troops.” As an Episcopal (Anglican) church, its understandable they might think of the sacrifice of Loyalists, of which there were thousands in New York. It’s an important part of the Rev. War story. St. Andrew’s is a stunningly gorgeous and evocative house of worship – worth the trip by itself.

We devoured both of the historical society’s museum sites. The 17th-century Thomas Halsey house is the quintessential “oldest house in town” restored and skillfully furnished with carefully chosen items from the museum’s permanent collection including some Halsey family items. Like most 17th-century houses, this one has been moved around a bit and restored with a heavy hand – but the bones and features are convincing, rare, and wonderful.

The museum’s flagship Rogers Mansion, built by a descendant of one the town’s founding families, whaling Captain Albert Rogers, was later owned by Samuel Longstreth Parrish who hired architect Grosvenor Atterbury to remodel and augment it. Parrish was a civic improver and philanthropist in a class by himself.

His influence on the direction and reputation of the town was epic. Among other things, he was responsible for founding the museum that bears his name; was a co-founder of the famous Shinnecock Golf Club; the Parrish Memorial Hall, the Rogers Memorial Library, and Southampton Hospital, were all established with his help. He also played a pivotal role in establishing the nations’ first outdoor art school in Shinnecock Hills.

All this and more are explored in a series of “Parrish Legacy” illustrated text panels situated around the Rogers Mansion museum.

The main exhibition this year is “Hunting The Whale: The Rise and Fall of a Southampton Industry” which, among other things, takes up the fascinating subject “To Go or to Stay” – about women, whaling, and the sea.

The museum is self-guided and the person on duty was delighted to field questions. Over the years they’ve moved half a dozen small historic structures onto their Rogers Mansion campus and they’re each interesting and presented well.

Like all my favorite historical museums, the Southampton History Museum’s display rooms are rich in art and artifacts. Don’t tell the exhibition design industrial complex, but visitors are often happy with less didactic approaches to display – lots of great stuff, the more the merrier, displayed respectfully and with information provided by docents or short labels. Heavily mediated history exhibitions cost way more than need be spent and personally, I find them annoying, so this was delightful.

No two people will respond the same way to the same things, but there were plenty of objects I loved seeing, including a rare circa 1800 tall clock by the renowned local clockmaker Nathanial Dominy; a better-than-average example of the common spool beds of the 1850s – this one made spectacular by its ornamental painting; a painting of the famous yacht Henrietta, captained by James Gordon Bennet Jr (his father owned the New York Herald), winner of the first transatlantic yacht race – a milestone of the yacht-obsessed Gilded Age; a 19th-century romanticized view of the Mayflower departing from Southampton England in 1620; a best-in-class Japanesque style vase – a superb example of china painting, plus several wonderful display maps. I love maps. Of course, like all of our best local museums, most of the things they have were originally owned and many made locally – a perfect educational springboard into a world of local learning.

Heading to Southampton via the North Fork from Orient Point in the morning, we stopped by for a look at the Suffolk County Historical Society in Riverhead at the intersection of the North and South Forks of Long Island, thirty miles from Orient Point through some of the most beautiful farmland and wineries in New York State – and 18 miles from Southampton. This museum is housed in an opulent purpose-built museum building from the 1930s. Founded in 1886, it is one of the oldest historical societies in New York State and probably the oldest east of Brooklyn, where the historical society itself was founded in 1863.

Riverhead isn’t as affluent as it must have been a century ago and while this museum has some great stuff (a lot said to be in storage – I asked),  the exhibits were a bit dated. It has a traditional, workman like series of thematic displays – on native peoples, agriculture, whaling, firearms and more. An exhibit about the Peconic River as a source of water power and its various applications was interesting. You will never find a better collection of Works Progress Administration historical dioramas – an obscure but fascinating facet of the famous art projects of the WPA during the Great Depression.

One of my favorite objects anywhere is there – an upscale 18th-century mahogany desk and bookcase with an eastern Long Island history of ownership that was made in New London, Connecticut. Why New London? Because in a maritime economy where Long Island Sound was the primary transportation system, New London was the largest commercial port in a region that, lest we forget, was originally part of Connecticut and was predominately settled by people with Connecticut roots.

Manhattan was an 80-mile slog along lousy roads – a lot further and harder to get to in the eighteenth century.

We got going with the house tour at the strike of 1pm and managed to make the rounds of the seven participating sites by about 3:30; leaving us just time enough to dash up the eighteen miles through snarly traffic to see the Pollock-Krasner House & Study Center in East Hampton – and then time enough to get back to the Rogers Mansion for the end-of-the-day champagne party – all included plus a swell Southampton History Museum tote bag with whale logo.

I had reasonably high expectations for Pollock-Krasner because, well, Jackson Pollock (1912-1956) is a giant figure in world art. Despite never selling anything during his lifetime for big bucks, his paintings have recently sold for as much as $60 million! The house is modest. The furnishings aren’t a freeze frame from his time there, since Lee Krasner lived on into the 1980s. But wow. It gave me (and the steady stream of Saturday visitors) goose bumps – as if the Cavern club in Liverpool – the birthplace of The Beatles – had survived intact. This is a place richly associated with that moment when American art came to dominate the world stage and it is filled with their stuff and stories. Walking on the paint dripped floor of his studio (in required booties) is a treasured experience. Changing exhibitions and a superb audio tour make this an A-list destination.

Back to the party – a little walking and gawking at the beautiful people around and about on a sunny summer Saturday in Southampton and then we dashed back thirty-nine miles without much traffic for dinner at Claudios Restaurant in Greenport, which claimed to be “the nation’s oldest restaurant continuously owned by the same family” (until it was sold this year). A nice relaxed seafood dinner before catching the last ferry back to New London at 8pm.

Of course there is way more to see and in this region for culture and heritage hard cores. All in all, it was another awesome day in New York History land.