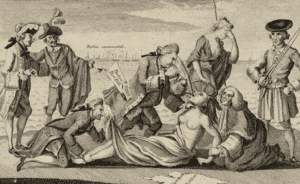 The Tea Act of 1773 did not increase the tax on tea as popularly believed (there were already duties on tea), but in order to prop-up the troubled British East India Company, it granted the firm a duty-free monopoly over the sale of tea in the most important ports in the American colonies, Boston and New York included. Without competition, the East India Company could set their own price.

On December 14, 1773 more than 100 Bostonians, of the several hundred who had gathered to protest, boarded three ships anchored in Boston Harbor and dumped over 300 crates of East India Company tea into the harbor. News of the protest spread throughout the colonies and other tea shipments would be dumped into various colonial harbors.

On April 18, 1774, the Nancy, commanded by Captain Benjamin Lockyer, landed at Sandy Hook with a cargo of 698 cases of tea from the East India Company. Lockyer was threatened to return to England or to lose his life, and local patriots took charge of the ship. They held the crew and escorted Lockyer into the city of New York, where he agreed to return to England with the tea, and began procuring supplies for the trip.

A few days later, on April 22, the ship London arrived, under the command of a Captain Chambers. Although Chambers protested that he had no tea aboard, the Sons of Liberty received word from Philadelphia that there were 18 chests hidden onboard, being smuggled for the profit of the Captain. Chambers was seized, the ship was searched, the tea chests were discovered, opened, and dumped into the river. The empty tea chests were then brought to the city, where they were used to ignite bonfires in the streets. Chambers was threatened with his life, but he managed to escape, and a few days later, the Nancy sailed for England with both Lockyer and Chambers aboard.

The British Parliament responded to the tea protests by passing the Coercive Acts (1774).  Except for the Quartering Act, which applied to all the colonies, these were focused on Massachusetts where they limited local government and closed the port of Boston. In response to these Intolerable Acts, colonists engaged in more protests, organizing the First Continental Congress before Lexington and Concord in 1775.

New York, and particularly New York City, were considered Loyalist strongholds at the time, but the New York Tea Party showed the revolutionary fire still burned hot among some patriots.

Illustration: A 1774 London Political Cartoon showing Lord North forcing the Coercive Acts down the throat of America (from Library of Congress).

Marie Williams is an independent historian, educator, and writer living in Upstate New York. She received her Bachelor's of Arts degree from The College of Saint Rose in Albany, NY in social studies adolescent education in 2014 and received her Master's of Arts degree from Southern New Hampshire University in Manchester, NH in American history in 2018. She has been writing about American history since 2011 on her blog titled "The Half-Pint Historian Blog" and has written a book about the British wilderness raids in Upstate New York for The History Press set to be released in spring 2020.