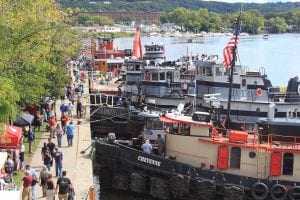 A new study of the economic impact of events and tours in the Erie Canalway National Heritage Corridor estimated $1.5 billion annually is generated by events, boat tours, bicycle and paddle-sport rentals and historic site/museum tours along the Erie, Champlain, Owsego and Cayuga-Seneca Canals. Events and tours drew 3.3 million visitors in 2017.

The economic analysis was conducted by Level 7 Market Research for the Erie Canalway National Heritage Corridor through its nonprofit affiliate, the Erie Canalway Heritage Fund, Inc., and supported by a grant from Market New York through I LOVE NEW YORK, the state’s Division of Tourism, as a part of the Regional Economic Development Council awards.

According to a press release issued by Erie Canalway National Heritage Corridor, over the last 10 years, the number of events in the Canalway Corridor has increased dramatically to include concerts, arts festivals, cycling and paddling events, celebrations of local foods and beverages, and events that focus on history and heritage. According to the NYS Canal Corporation website, the 2017 calendar held more than 470 events.

The eastern Erie Canal from Waterford to Brewerton is scheduled to open May 15, weather permitting, with an opening ceremony to take place at Lock 2 in Waterford at 10 am. The entire canal system is set to open on May 18.

The Erie Canalway National Heritage Corridor spans 524 miles across the full expanse of upstate New York, encompassing the Erie, Cayuga-Seneca, Oswego, and Champlain canals and their historic alignments, as well as more than 230 canal communities.