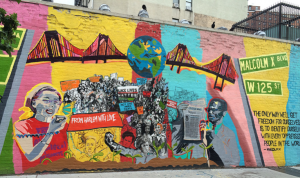 A “Radical Routes Tour” focusing on Harlem’s Women Activists has been set for Saturday, June 9 at 10:30 am, beginning at the Museum of the City of New York.

Attendees will get to know the pioneering women of color who helped make Harlem a world-famous center of social activism, cultural experiment, and progressive politics throughout the twentieth century.

The tour will visit the street corners, buildings, public places and neighborhood spots where a diverse group of women made history – with repercussions that extended far beyond Harlem’s streets to the world beyond. Afterwards attendees can return to the Museum for lunch on the Terrace.

Dominique Jean-Louis is a doctoral candidate in U.S. History at NYU and received her B.A. in Comparative Ethnic Studies from Columbia University. Her dissertation work explores Caribbean immigration to New York City in the years following the civil rights movement, examining the impact of schooling on the formation of racial identity.

At the Museum of the City of New York, Jean-Louis has served as a Mellon Predoctoral Fellow in Museum Education as well as contributed to the exhibition New York at Its Core. She has also served as a Public Humanities Fellow with the New York Council for the Humanities. She is currently a curatorial project historian on Black Citizenship in the Age of Jim Crow, an exhibition at the New-York Historical Society opening in the fall of 2018.

Photo of From Harlem with Love A Mural Project for Yuri & Malcolm, photo by Noah Lichtman.