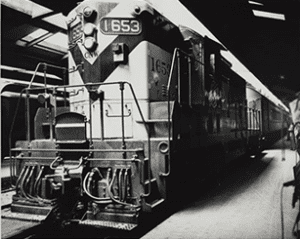 Part of the collection, more than 1,600 geotagged photos of railroads around the nation from the 1950s, have now digitized and are available on the library’s digital collections site. 380 boxes of records, photographs, correspondence and more, make up the 63 newly processed railroad collections.

They document the often tense relationship between railroad carriers and the groups representing their workers, and range roughly from the 18thcentury – when horse-drawn carts traversed the tracks and whale oil lit the headlamps on steam engines – to the 2000s.

The collections, drawn from the records of railroad worker union groups and owners, contain firsthand accounts of the Marshall Plan, since railroad unions sent emissaries to help rebuild Europe’s railways after World War II. They document deadly violence against African-American trainmen. They even include a narrative of Augusto Pinochet’s coup in Chile, from a union representative working there with local trade unions.

They include material about the Railroad Retirement Act of 1934, used as a model for creating Social Security. Detailed records track the Bracero Program, which promised decent living conditions and wages to international workers filling labor shortages in the United States. They also contain data on drug and alcohol use among train employees, with records of shifting ways of addressing substance abuse so employees would not be afraid to seek help. And the material documents the impact of the 1980s war on drugs, through the Railway Labor Executives’ Association’s lawsuit against the government seeking an end to random drug testing.

Collections from transit workers’ labor organizations in and around New York City relate to the unification of the city’s original three subway lines as well as battles over subway workers’ pay, fare hikes, repairs and state versus city control – battles that strongly echo debates happening today. The Transit Workers’ Union records also contain information on their financial and organizational support for the 1965 Selma to Montgomery, Alabama, march with the Rev. Martin Luther King Jr.

As part of the efforts, 1,655 photographs were digitized, geotagged and posted online through the library’s digital collections site, Flickr and Shared Shelf Commons. The photos were taken by union members to document their workplaces, as part of President Dwight D. Eisenhower’s Railroad Commission board, created to arbitrate a longstanding dispute between railroad carriers and unions over the number of workers needed to safely operate trains.