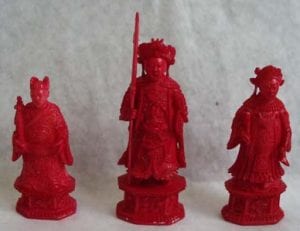 U.S. Grant Cottage State Historic Site is set to open for the 2018 season on Memorial Day weekend, May 26-28, with new exhibits and the return of a popular program highlighting Cottage caretaker and Civil War veteran Oliver Pendelton Clarke and his wife Martha.

A new exhibit in the Grant Cottage Visitor Center, “Let Us Have Peace: Reconstruction and the 1868 U.S. Presidential Election,” celebrates the 150th anniversary of Ulysses Grant’s first run for President. The exhibit includes items such as a period ballot box, tintype photos, 1868 ballots, and publications covering the election.

Items focusing on the Grant family which have not been recently displayed are now being showcased in the Cottage’s editing room. Exhibited for the first time at Grant Cottage are a cribbage board and chess set, which were used by Grant and his sons. The objects are said to have been gifts to Grant and his family, probably during his world tour. A handwritten note that Grant wrote when he could no longer talk requests that his son Jesse join him to play cards. These items illustrate that although activities surrounding the memoirs took up most of the family’s time, casual time together was still important.

A special program on Sunday, May 27 at 1 pm, “Oliver and Martha Welcome You” will focus on the first caretakers of Grant Cottage, Oliver and Martha Clarke. Reenactors Steve Trimm and Melissa Trombley-Prosch will portray the Clarkes as they share reflections on their life together on Mt. McGregor in the setting of Memorial Day 1907. Clarke was a high-ranking official in the New York State Department of the Grand Army of the Republic (a Union Veteran organization), an attorney specializing in pension law and author. Disabled as a result of his prisoner-of-war experience at Andersonville during the Civil War, he accepted the job of Cottage caretaker in 1889 in the hope his health would improve. Clarke and his wife Martha Josephine Kelsey Clarke spent the rest of their lives on the mountain dedicating themselves to preserving Grant Cottage and the memory of U.S. Grant’s final battle there in 1885.

Grant Cottage is open Wednesdays through Sundays from 10 am to 4 pm beginning Saturday, May 26. Cottage tours are $6 for adults, $5 for seniors, and $4 for students ages 6-18. The suggested donation for programs is $5 per person.

Photo of Red Chess set thought to be mid-to-late 19th century Chinese, carved from Indian ivory, dyed with a vegetable dye and appears to represent Manchurians.