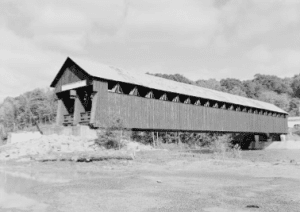 New York State has approximately 17,000 highway bridges. They are essential for traveling around our state and connecting our communities. Bridges – old and new – are part of community and state history. The story of the Blenheim Covered Bridge across the Schoharie Creek the town of Blenheim in Schoharie County is one of history, resilience, and restoration.

Completed in 1855, the 210-foot long wooden toll bridge served travelers and farmers. Its charter expired in 1891 and it was transferred to the State. New bridges rendered it obsolete and in 1931, after the State proposed to demolish it, Schoharie County purchased it and maintained it as a historic site – the longest single span wooden covered bridge in the world. It was designated a National Historic Landmark in 1964.

But in August 2011, the Schoharie Creek, swollen with floodwaters from Hurricane Irene, swept the bridge downstream and demolished it. Volunteers later salvaged a few beams and other pieces of the destroyed structure.

The National Park Service added to the sense of loss by withdrawing its designation of the bridge as a designated historic landmark in 2015. As an NPS report noted, “none of the bridge remains at its former site, and pieces of it were scattered far and wide downriver.”

Blenheim residents came together and formed the Blenheim Long-Term Recovery Committee and developed a long-term community recovery plan in 2012. The plan noted that “one of the greatest losses to the community — both culturally and economically — was the historic Blenheim Covered Bridge.” The flood destroyed the bridge, but it could not wash away the pride and resilience of the people of Blenheim and Schoharie County. The campaign to build a replica bridge began.

Town and County officials began petitioning FEMA – the Federal Emergency Relief Administration – for funds to build a replica bridge. FEMA, which provided funding in response to much of the devastation from Hurricane Irene, declined. The bridge was a historic artifact, a relic of past times. FEMA could not authorize funds for restoring a covered bridge that had not been used for traffic for decades and that would serve only sightseers. FEMA officials suggested that the Town build a memorial pavilion on the bank of the creek to commemorate the bridge.

But Blenheim residents, led by activist Don Airey, head of the Blenheim Long-Term Recovery Committee (now Town Supervisor), and Schoharie County officials, persisted. They argued that that FEMA was supposed to pay for structures destroyed by catastrophes like Irene. The Bridge had been a tourist attraction, and therefore an important part of the town’s and the county’s economy. FEMA began to waver and reconsider.

In 2013, it offered the county $1.3 million to pay for a “gazebo” at the site. Robert Mann, who was then the Blenheim Town Supervisor, called the offer “plain absurdity…. I don’t know how you replace that bridge with a gazebo.” The county rejected the offer. They wanted their bridge rebuilt.

The next year, 2014, FEMA gave the county a grant to pay for a design for a new covered bridge to replace the destroyed one.

In 2015, after more lobbying and negotiations with state and local officials, FEMA agreed to pay 75% of the $6.7 million replacement cost. The State will pay the remainder.

Don Airey explains that the campaign for the new bridge was part of a broader campaign to make sure FEMA takes into account the plight of rural communities as well as suburban areas and big cities, which have more political clout. He said that in discussions with FEMA, he and other officials downplayed the historical significance of the bridge, framing the argument as an assertion that FEMA was established to replace lost assets, and this bridge was an asset for the town and the county.

The county hired the New Hampshire-based firm of 3G Construction, which specializes in stabilization and authentic reconstruction of covered bridges and other historic structures, to design the new bridge The new bridge will be a replica of the old one but will be constructed on abutments about 12 feet higher than the old one to protect it against future floods.

The new bridge is nearing completion and will be opened later this year.

It will be part of a planned creek-centered trail network. The town plans to raise funds to demolish an old highway garage near the bridge and build a pavilion for bridge visitors.

A London-based film crew has been filming the construction for an episode on the PBS series “Nova.” “This is really important icon for our little town,” says Airey. “It’s a tremendous opportunity again to use the bridge as a tourism driver for the southern part of Schoharie County.”

In all of the discussions over the past seven years, there has been a good deal of attention to historical tourism, but less to the history and significance of the original bridge. It isn’t clear yet just what sort of historic marker or other information will be available at the new bridge or how it will fit into other historical activities.

Nor is it clear if the Blenheim decision indicates that FEMA will be more amenable to historical restorations in the future. “The Federal Emergency Management Agency (FEMA) plays a critical role by helping communities incorporate environmental stewardship and historic preservation into emergency management decisions,” says its Fact Sheet on Roads and Bridges. But this seems to pertain to planning and decision-making for active bridges.

But the new bridge is boosting community confidence and pride even months before its completion. “It’s like we’re coming back as a community,” Blenheim resident and former New York State Secretary of State and a strong advocate for the new bridge told Albany Times Union reporter Chris Churchill. “It’s like seeing an old friend.”

Photo of Old Covered Wooden Bridge at North Blenheim courtesy History of the Town of Blenheim 1797-1959.