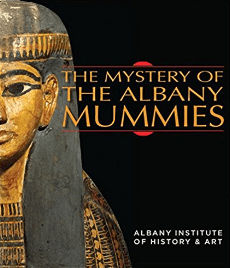 A new book, The Mystery of the Albany Mummies (Albany Institute of History & Art, 2018), tells the story of how two ancient Egyptian mummies ended-up at an Albany museum.

In 1909, two mummies, one dating from the 21st Dynasty and the other from the Ptolemaic Period, were purchased from the Egyptian Museum in Cairo by Albany businessman Samuel Brown for the Albany Institute of History & Art. They have been on continuous exhibition since.

The story of their discovery in the tombs at Deir el-Bahri and their subsequent purchase by Brown, transport by steamship from Cairo to New York City, and steamboat travel to Albany was covered extensively by local newspapers.

The Mystery of the Albany Mummies tells the tale of these two mummies, from their initial mummification in ancient Egypt, to their acquisition by the AIHA in 1909, and finally to 2013, when the mystery of their identities was uncovered through the intersection of historical scholarship, science, and technology.

In the book, which draws on the Institute’s 2013–2014 exhibition “GE Presents: The Mystery of the Albany Mummies,” scholars from around the world use new scholarship, scientific methods, and medical technology to determine the ages, sexes, occupations, and lifestyles of these two ancient denizens of the AIHA.

The Mystery of the Albany Mummies is edited by Peter Lacovara and Sue H. D’Auria.

Sue H. D’Auria is an Egyptologist who worked for nearly two decades in the Egyptian Department at the Museum of Fine Arts, Boston, and was an Associate Curator at the Huntington Museum of Art. She has edited several books, including Offerings to the Discerning Eye: An Egyptological Medley in Honor of Jack A. Josephson.