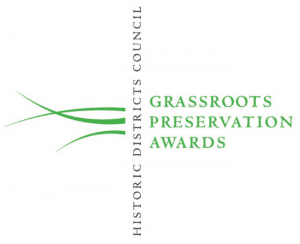 The Historic Districts Council of New York City has announced the winners of their 2018 Annual Grassroots Preservation Awards, which will take place on Tuesday, April 24 from 6 to 8 pm at the St. Mark’s Church-in-the-Bowery, 131 East 10th Street, New York.

This year’s Grassroots Awards recipients work on the ground, in public service, in communities and online to bring attention and resources to saving the heart and soul of New York City.

​Bowery Boys: A weekly podcast which highlights NYC history, with a fondness for preservation. They also maintain a widely-read website and published their first book about NYC last year.

George Janes: A professional development and zoning expert who has been working with numerous community groups, such as FRIENDS of the Upper East Side Historic Districts on an Upper East Side rezoning proposal to protect their community and the Committee for Environmentally Sound Development on their opposition to a super-tall tower rising out of a gerrymandered site at 200 Amsterdam Avenue.

Susan Olsen: As Director of Historical Services at Woodlawn Cemetery, for the past decade she has helped raise awareness of this national historic landmark, restore innumerable monuments and train dozens of young people in hands-on conservation techniques.

Karen Ansis: for her distinguished 25 years of service at the New York City Historic Properties Fund of The New York Landmarks Conservancy, disbursing tens of millions of dollars in grants and loans to private homeowners and charitable institutions for historic restoration and stabilization projects throughout New York City, and ensuring that hundreds of historic buildings were properly cared for.

6sqft: A media website specializing in the places, people, and ideas that shape New York, utilizing original journalism. They have helped spotlight both individual and neighborhood preservation efforts for a wide audience and regularly publish in-depth articles on broader preservation concerns.

State Senator Brad Hoylman (M 27, D,WF): representing the East and West Village, Chelsea and Midtown, Senator Hoylman has long been a supporter of preservation efforts. Even before he was elected in 2012, he was involved in the preservation campaigns in his community, such as the effort to save the Poe House from New York University.