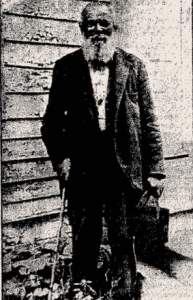 “A Negro Elected President of the Village of Cleveland.”

On May 16, 1878, this was the startling title of the Oswego Daily Times’ article on the election of Edward “Ned” Sherman as President, or Mayor, of a small village of approximately 500 residents on the North shore of Oneida Lake three days earlier.

His one year term began with a surprise win in a special election for the office. It’s said he did not campaign for the post, which opened after a surprise resignation.

Upon his taking office, The Rome Daily Sentinel referred to Cleveland as “a mirthful village [that] must be peopled by a lot of fun-loving fellows.”

According to historian George W. Walter’s The Negro President, in Tales of Oneida Lake (1993), Sherman was born on June 9, 1807 in Saratoga where he lived for twenty years before moving to Herkimer at the age of 21. Finally, he settled in Cleveland in 1851 as a practicing barber.

Exactly when he became involved in local politics cannot be determined but it was not a new endeavor for him by 1878. For example, before the village’s annual charter election of 1878 on April 13, Cleveland’s The Lakeside Press lauded his electioneering skills, asserting that “among the many who labored Industrially for our [Greenback] ticket, none were more active than Ned Sherman. Ned deserves credit for his effective work” for his Party, which led to Albert A. Yale’s victory as President.

At the regular meeting of the Village Board on April 29, Cleveland’s religious tensions became vociferously public. Anti-Catholicism burst forth from many of those in attendance. It was Trustee Keogh’s motion for the appointment of President Yale’s recommendation to be sexton of the village cemetery that sparked the outburst.

The Press explained that the man “happened to be an attendant at the Catholic Church, and because of this a perfect storm of howls and shrieks and denunciations forthwith filled the air, and were hurled at the Board.” The “storm” generated three results. First, the motion failed by a 4-1 vote, even though the Trustees and the President were members of the same party. Second, Yale tendered his immediate resignation. Third, the Board resolved for a special election for a new President.

The Press does not mention if Edward Sherman attended the Board meeting on the 29th but he was there at the special election on May 13. Sherman was one of three candidates for the Presidency, the other two being unnamed white men. No exact tally of the ballots can be found, but Sherman won by 20 votes.

Newspapers mocked his election as “a matter of burlesque,’ and resulted from “a moment of pique,” no doubt referring to the role of race. “Ned….will not be a bad looking person when carved ivory comes in fashion again,” one paper said. It’s said that a crowd was on hand for his first Board meeting to see how he would do.  Yet Sherman’s service for the one year term was business-like.

Sherman was also a candidate for a post in village government in 1883 when there was an opening for Trustee. According to The Press Ned Sherman won 21% of the vote, 8 out of the 38 votes cast.

Sherman is believed to be the first African American to serve as mayor in New York State.