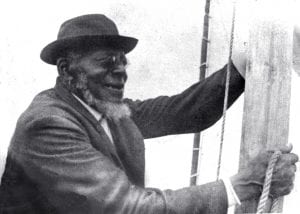 An exhibit on the whaling industry in 19th century Southampton is now on display at Rogers Mansion, 17 Meeting House Lane, Southampton, until August 4th, 2018.

The exhibit is open Wednesdays to Saturdays, 11 am to 4 pm, admission is $4, free for members and children 17 and under.

Hunting the Whale: The Rise and Fall of a Southampton Industry adds new discoveries to the accumulation of documentation and artifacts collected over more than 100 years to illuminate Southampton Village’s prominent role in the whaling industry at its mid-19th century height. Whaling tools, maps, illustrations, archival images and text will be displayed with an eye toward making the exhibit accessible to audiences of varied interests and all ages. Among those whose roles will be highlighted are local indigenous people, slaves, servants, whaling captains, and the families that were sustained by the whaling industry.

This exhibit takes place inside the historic Captain Albert Rogers Mansion, a 20 room Greek-revival house was built in 1843 during the peak of the whaling industry. It was built by Captain Rogers was one of the many prosperous whaling captains living in Southampton during the 19th century.