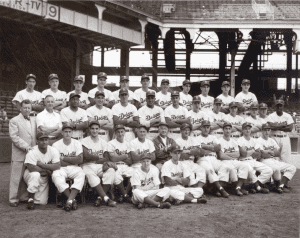 The next lecture in the Old Stone Fort Museum Winter Lecture Series has been set for Sunday, March 25th at 1 pm, with “A Night with the 1950 Brooklyn Dodgers of Old”, presented by local attorney and former Dodgers ball boy Marv Parshall Sr.

Parshall will share his recollections, stories and anecdotes of his time sharing a dugout with baseball legends such as Jackie Robinson, Roy Campanella, Pee Wee Reese, Gil Hodges and Duke Snider.

A lifelong resident of the region, Marv Parshall was born in Cooperstown and educated in Oneonta and Albany before receiving admittance to the New York Bar Association in 1960. Since 1961, he has practiced law in Schoharie and Otsego Counties as a general law and county attorney. In 1950, however, he left upstate New York and traveled to Flatbush Brooklyn, where he was able to live out the dream of countless young baseball fans by becoming a ball boy for the Brooklyn Dodgers at Ebbets Field.

While the Dodgers struggled through most of the season, 1950 did mark some important milestones in the organization’s history. Parshall was there when Duke Snider went on a 22 game hitting streak and will be able to talk about what it was like when, on August 31, 1950, Gil Hodges became the first player in the 20th century to hit four home runs in a single game in his home park.

1950 was also the final year Branch Rickey served as general manager of the Brooklyn Dodgers. Rickey was the first general manager in major league baseball to successfully break the color barrier when he added Jackie Robinson to the team roster in 1947, followed by Roy Campanella in 1948.

In addition to his stories, Parshall will have photographs and memorabilia on hand commemorating his time with the team. Refreshments will be served.

Admission to the lecture is $5 for adults and free for students and Schoharie County Historical Society members. The Old Stone Fort Museum Complex is located in the village of Schoharie at 145 Fort Road, off NY State Rt. 30, 2.5 miles south of Interstate 88 Exit 23.

Photo: A young Marv Parshall Sr. (front left) poses with the members of the 1950 Brooklyn Dodgers.