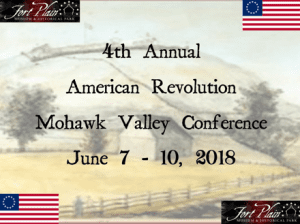 The conference will include 11 presentations, a Bus Tour of 1778, a new Genealogy Day, a new fundraising dinner featuring portrayals of George Washington and James Madison, a presentation by Russell Shorto, and more.

Eric H. Schnitzer – “Hessians” at the Battle of Bennington, 1777

James L. Nelson – Benedict Arnold’s Navy: The Story of the Rag Tag Fleet that Lost the Battle of Valcour Island and Won the American Revolution

Visit Mohawk Country historic sites (sites, schedules and admission fees will be posted separately). Sites will have presentations and/or historians on hand to discuss the families that fought on both sides during the American Revolution.

Join George Washington and James Madison, protrayed by Brian Hilton and Kyle Jenks, as they discuss their journeys to upstate New York and other founding moments.
An all new fundraising dinner, including a cash bar with a variety of alcohol and non-alcohol beverages will be held at The Bridge Walk at the Perthshire in Amsterdam

The Microtel Inn & Suites by Wyndham is the official Conference lodging. The Microtel is located at 136 North Comrie Avenue, Johnstown. The Microtel is holding a block of rooms at a Conference rate of $79 plus tax per night for June 6 through 9, 2017. Guests must call (518) 362-7022 before May 9, 2018 and the rooms have been booked under “Fort Plain Museum Conference”.

Registration is required, last day to register is Thursday, May 31, 2018. For more information and to register, click here.