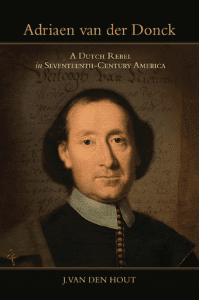 At best, he has been labeled a hero, a visionary, and a spokesman of the people. At worst, he has been branded arrogant and selfish, thinking only of his own ambitions.

The wide range of opinions about him testifies to the fact that, more than three centuries after his death, Van der Donck (after whose honorific Jonkheer, Yonkers is named) remains an intriguing character.

J. van den Hout follows Van der Donck from his war-torn seventeenth-century childhood and privileged university education to the New World, as he attempted to make his mark on the fledgling fur trading settlement.

When he became embroiled in the politics of Manhattan, he took the colonists’ Remonstrance against their Dutch West India Company administrators to the highest level of government in the Dutch Republic.

Denounced and detained, but not deterred, Van der Donck wrote Beschryvinge van Nieuw-Nederlant (Description of New Netherland), published in 1655, that stands as a testament to the changes he helped set in motion.

Julie van den Hout is an independent scholar who lives in California. This is her first book.